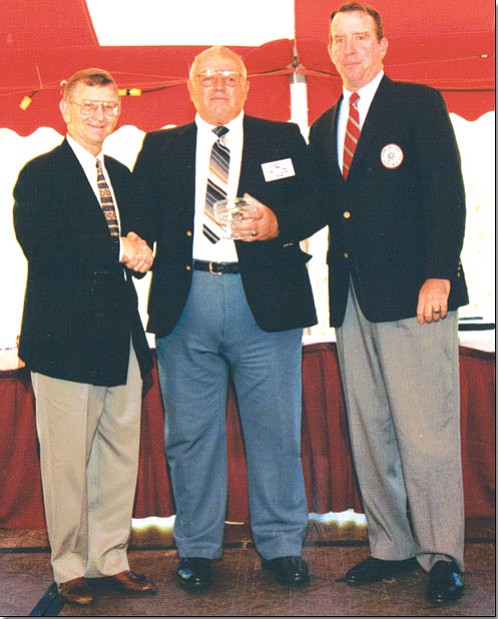 Emil Nasser came to Winslow High School as the head football coach for the Bulldogs in 1947. His first game was a good indication of the special brand of success that would follow. On that afternoon, the Bulldogs defeated the Snowflake Lobos 12-6 on what was just dirt then, but were on the present location of Vargas Field. Games were played on Saturday afternoon because there were no lights on the field. Lights were added in 1948.

The 1947 Bulldogs finished their first season under Nasser with a 7-1-1 record. The tie was with Flagstaff High School in the last game of the season. The loss was to a large and tough team from Prescott High School and broke a Winslow winning streak. The Bulldogs had won their first five games under the old Himalaya hump flyer.

Nasser was the head mentor of the Bulldogs from 1947 until his retirement after the 1981 season. He won three state championships and 16 conference titles in his 35 years as coach. His teams won 234 games and lost only 90 with nine ties to complete the enviable record that ranks in the top handful of coaches ever to practice that profession in Arizona.

Nasser also served Winslow High School as a coach of both track and baseball. It is accurate to report that he was intricately involved in every sport the school participated in even before he became the school's first athletic director. He spent seven years as junior varsity basketball coach. His track teams won at least nine conference championships and were second in the state twice. He and Doc Wright started the cross country program at Winslow High School.

Besides his duties at Winslow High School, Nasser was also very active as a certified official in football, basketball and baseball. He served many years as the regional director of the Arizona Interscholastic Association's northern area basketball commissioner. He recruited and worked with officials for every sport.

Under Nasser, the Bulldogs won Arizona State Conference championships in 1948, 1949 and 1964. They were 9-1 in 1969 but lost a playoff game to Safford by a narrow margin under difficult conditions. Winslow had two more losing playoff experiences.

After his retirement, Nasser volunteered to help coach the Joseph City Wildcats and was an important part of two state championships won by that neighboring city. He has continued to be an active fan and helper when needed for local football programs. A coach could not expect more important and useful assistance for his program than to make use of the knowledge and experience of one of Arizona's and America's finest high school football coaches.

The building of Winslow into a football powerhouse was not a one man job although the direction and leadership of Nasser was the most valid element. He will cite a number of individuals who played important roles in the success of the program and of all sports programs at Winslow High School.

Ray Booth was the superintendent of schools in Winslow when Nasser was hired and he did everything he could to see that the man he selected for the job had success. Booth supported Nasser's decision to convert undeveloped land into what is now Emil Nasser Stadium. The team played its first season under Nasser on dirt at what is now Vargas Field.

Nasser had crews of players who volunteered to trim yards and used the excess grass they had trimmed to begin filling in the infield at what is now Vargas Field and the playing surface of what was to become Emil Nasser Stadium. His efforts to develop grass fields and set up the most desirable possible field given the limitations of the site had no greater advocate than Ray Booth. The long time superintendent deserves much credit for the success of the Winslow school system and its sports program.

Nasser's first assistant coach was Jim Curtis, a fellow veteran who went on to become the principal of Winslow High School and later Winslow Junior High School. The two worked well together and remained friends until Curtis retired and eventually died. When Curtis was recalled into the service, Earl Benham served as Emil's assistance coach and was much appreciated.

Carl Weatherton spent many years as Nasser's assistant coach and the man in charge of the Bulldog defense. Weatherton was also the baseball coach at Winslow High School, a position Nasser himself filled when he first came. He won a state baseball championship in 1964 to go with the football championship he had helped Nasser's team win. He also became the school's first golf coach and was a lifelong friend of Nasser.

Trainer Herman McArthur is another individual it is hard to imagine a Nasser coached team without. He was an inspirational leader of the team and a quite confidant of the players. His skill and preventing injuries and taking care of minor ones was of great importance to the school's athletes in all sports throughout his tenure there.

Nasser will not single out players for praise as he was very fond of most that wore the maroon and white and gave their all for his teams. The key to virtually all of Nasser's teams is that they were a team. They played to win as a team and not to reap glory for an outstanding individual performance.

A reunion not many years ago of the 1964 state championship team showed this trait as their most prominent feature. This was not a physically imposing team, though they were blessed with talent and quickness. Most played at a level above what their physical nature would lead one to expect.

Mike Madeo was a key ingredient on this team and has to rank among the best players ever to come out of Winslow High School. He was a stalwart at running back and linebacker on the squad and Nasser cites the ferociousness of his play on defense as a major reason for the 7-0 victory over Tucson Flowing Wells in the state championship game. Madeo was also the center on the basketball team and an outstanding track athlete. He was also a soloist for the Winslow choral group and amazed students at some schools that a football star would be that talented a singer.

Madeo starred at the collegiate level at the University of Arizona and had an outstanding career in education in Arizona and Utah. One of his fellow backs was Mike "Silky" Sullivan, who was an amazing athlete for one of his small size. He is now an attorney in Phoenix. "Mike" was a common name for star Winslow football players. Other "Mikes" included Mike O'Haco, Mike Curtis and Mike Lopez and there were probably others with that name.

A number of Nasser's players have returned to Winslow and many have followed him into the teaching and coaching professions. Among these are current Athletic Director and girls' basketball coach Don Petranovich and current baseball coach Art Griffith.  Even more such former players have contributed to sports as umpires or referees. Crannie Hysong was a fine player who became an excellent coach in both football and track. He was a head track coach before his move to Peoria. His son was an Olympic pole vault champion.

Ted Wilcox was a Native American quarterback for Nasser and an excellent multi-sport athlete. He served the community as a teacher, coach and principal before his death.

Nasser will cite his two High School All American players as Gene Goldsberry, who was an offensive lineman and defensive linebacker and Gary Cox, who was an exceptional running back.

Nasser's own son Danny played four years for him and was an outstanding player on offense and defense. He was also one of the lightest heavyweight wrestling champions in the state during his career.

Among the many noteworthy accomplishments of Nasser was the teaching of literally hundreds of children how to swim each summer. There is no telling how many lives he saved by imparting this vital knowledge and skill with free swimming lessons.

Much of his success in his duties as swimming pool manager and as city parks manager was due to the support of city councilmen Bus Mead and Tony Kolomitz. Both recognized the value of the programs Nasser wanted the city to offer and saw that he got the opportunity to provide them.

Nasser brought football and all sports in Winslow to a better level than it had been before, though the town had enjoyed some good players and teams in moat sports. It is difficult to imagine where Winslow sports would be without Nasser, but it is impossible to think that it would be any better. The success of sports in Winslow is, at least in large part, due to the presence of Emil Nasser at a critical time in its history.