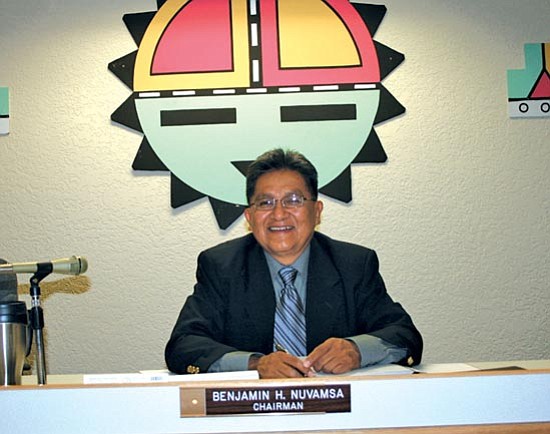 KYKOTSMOVI, Ariz. - At stake is a 12,000 member federally recognized tribe, potentially millions of dollars in financial revenues that could be gained from on-reservation natural resources, federal tribal sovereignty status and the long-standing centuries-old cultural and spiritual reputation that incorporates consensus building.

The year has been a tumultuous one for the Hopi people, starting with former Chairman Ivan Sidney being ousted when the Hopi Tribal Council charged that he had neglected his responsibilities as chief executive officer stemming from a public intoxication complaint filed by members of the Hopi Council, including current Vice Chairman Todd Honyaoma.

Sidney's removal as chairman led to a special tribal election after which Benjamin H. Nuvamsa was declared the winner. But Nuvamsa also had his own personal issues.

The question of whether Nuvamsa met the "formal, physical residency" on the Hopi Reservation for two years prior of filing for candidacy was scrutinized. Formal residency is one of the requirements for being eligible to run for an elected tribal office on Hopi.

Although the issue of Nuvamsa's residency had been raised and resolved twice by the Hopi Elections Board's review board, these questions continued to be raised not just by the disgruntled candidates of the special tribal election, but also by Honyaoma and Hopi Tribal Council Secretary Mary Felter.

A final ruling from the Hopi Tribal Appellate Court concluded that Nuvamsa did indeed meet this residency requirement.

Even though some Hopi community members have still voiced their disagreement, most of the reservation tribal membership had hoped that this appellate court ruling would put a stop to the internal bickering that had been going on at the Hopi tribal offices since Nuvamsa was sworn into office.

Detractors of Nuvamsa have continued to question his executive authority and have routinely submitted Hopi tribal resolutions and community editorial declarations that he is not the official chairman of the 12,000 member tribe.

This latest concern for the Hopi community came to a head on Sept. 22 during which 13 members of the current 22 member Hopi Council passed a resolution to "suspend" the executive authority of Nuvamsa effective that day.

Though Nuvamsa has repeatedly told the media that he feels that this move was illegal and nothing more than a "political ambush," nothing has yet been done by the villages, though there are many resolutions available to rectify the current situation.

On top of this, the hiring of Sidney as Honyaoma's new chief of staff left many community members bewildered. Many of them, including Nuvamsa, feel that "Sidney is the real organizer behind all the recent suspension and nullification activity ..."

Since Honyaoma was one of the most outspoken for wanting to remove Sidney following his public intoxication charge, it took many by surprise that Honyaoma would hire the same man for what he termed as "irresponsible public intoxicated behavior by an executive officer."

Sidney's appointment as the new chief of staff brings with it a variety of community rumors that with the help of his former press officer, Bertha Parker Torres has been assisting in drafting some of the narrative materials that have led to Nuvamsa's suspension.

But all this speculation still leads to the same, real-life Hopi tribal dilemma: Who has formal oversight in running the day-to-day tribal programs? Who has formal authority to sign legal documents and negotiate on behalf of the Hopi Tribe? Who can preside over the Hopi Council meetings?

The recent resolution centered around the Sept. 22 resolution authored by First Mesa Representative Leroy Lewis in which he stated that it was a "disrespectful lack of acknowledgement" of the part of the First Mesa kikmongwi to authorize and certify their selected representatives. Complicating this was whether the term and title used for "First Mesa Consolidated Villages" really truly represents all three villages anymore.

Each of these three villages have separate governing boards, separate village budgets, separate administrative offices, separate projects and separate ideas, giving the very real impression that they are no longer "consolidated." The only thing they share in common is the Kikmongwi, the only person who can certify or decertify village representatives of all three villages. The current Kikmongwi of First Mesa is James Tewaguna.

What is unclear is whether the three villages' memberships are able to vote in their chosen representative by popular election or are they subject to having "appointed" representation by the Kikmongwi and his advisors. This issue is at the heart of what led to Nuvamsa's suspension on Sept. 22.

Since then, Nuvamsa has countered the suspension by asking the Hopi Tribal Court to issue a temporary restraining order against Honyaoma and to have all charges against him dropped for lack of probable cause.

After Nuvamsa's Oct. 13 arraignment hearing in which Nuvamsa pleaded not guilty to all charges, Hopi Tribal Judge Delfred Leslie released Nuvamsa on his own recognizance until his Nov. 3 pre-trial, but not before Interim Acting Prosecutor Jeffrey Porturica requested that Nuvamsa be subject to a "no contact" condition on his release.

Porturica defended his request stating that, "a no-contact condition of release is requested for Mr. Nuvamsa by this office ... because that is the focus and charge of the entire lawsuit and if Mr. Nuvamsa is allowed to go to his office, he is violating the filing of the tribal resolution."

Judge Leslie said that he wanted to keep the conditions of the release for Nuvamsa consistent with all other releases he had already set that morning for other defendants and specified that as long as Nuvamsa agreed not to break any laws of the tribe or state, that he was free to leave on his own recognizance.

This changed on Thursday, Oct. 16 when Interim Chief Prosecutor Porturica filed a formal complaint against Nuvamsa for not turning in his tribal office keys and equipment per the resolution that was passed on Sept. 22. A tribal warrant was then issued for Nuvamsa's immediate arrest.

Nuvamsa, who was in Phoenix that day for meetings on behalf of the tribe, heard via cell phone of the warrant issuance.

Nuvamsa in a phone interview last Thursday afternoon said he was meeting with his attorney and was filing a motion to quash the warrant and an immediate dismissal of all other charges stemming from the Sept. 22 resolution.

He stated, "This whole issue has been orchestrated behind the scenes not just from the First Mesa representatives and their supporters, but I truly believe that Ivan Sidney and his spokeswoman, Bertha Parker, have much to do with this current attempt to remove me."

"I really think they want me out of the picture, particularly because I am adamantly opposed to their posture on the Peabody issue and I am just one more obstacle in negotiating with Peabody without formal consultation or accountability to our Hopi constituency. We are in the middle of critical tribal negotiations for many of our natural resources and I am fearful that our tribal Energy Team is not being totally honest with the tribal membership about our interests," he added.

Nuvamsa concluded by saying, "I want to thank all the Hopi and Tewa people who have continued to support me, including the ones who showed up at Hopi Tribal Court ... because this corruption and continued smoke screen of me not respecting the religious leaders has to stop. It's unfortunate that even our Hopi tribal attorney Scott Canty is also involved in this corruption.

The very people who should be holding fast to our tribal laws ... are the very ones who are now breaking these same laws. I intend to expose all of them for the corrupt way in which our tribal government is being run and will hold each of them accountable to the Hopi and Tewa people for their less than honorable activity."

Two attempts were made to reach Vice Chairman Honyaoma for comment, but his secretary responded that he was not in the office on Friday morning and would not be available until late Friday afternoon. A second follow-up phone call that same afternoon was not answered.