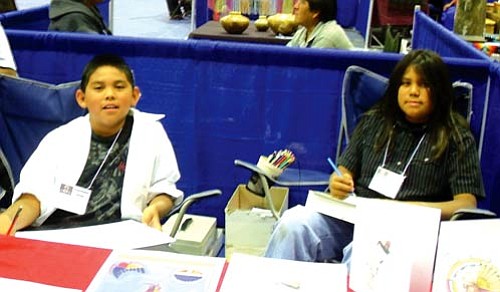 <i>Photo by Rosanda Suetopka Thayer/NHO</i<br> Young entrepreneurs, Blaine (left) and Brandon Scott of Hotevilla, were among the youngest artists to participate in the 2008 Hopi Tuhisma art show. Their one of a kind drawings with pen, ink and colored pencil featured many traditional style Hopi images and ideals.

Joyce Saufkie of Shungopavy and Rex Pooyouma of Hotevilla were selected as this year's distinguished winners of the lifetime awards. Saufkie was honored for her work in pottery and Pooyouma was honored for his traditional moccasin making.

Talahaftewa was pleased with the event's turnout, along with the new kachina poster/T-shirt image and the keen interest that outside audiences have for purchasing genuine Hopi-made art pieces at their home reservation source.

Each year, free booth space is offered to young Hopi artists or schools to participate in the two day event.

This year, brothers Brendan and Blaine Scott of the Cameron-Hotevilla area filled their art booth with their submissions of two dimensional ink-pen and colored pencil and original hand-drawn art cards.

This was the young brothers' first foray into marketing their original work, which is one of the prime reasons that Talahaftewa founded the Hopi Tuhisma.

"Our committee is interested in not just selling Hopi art on this weekend, but we also want to mentor and support our younger up and coming artists. If these younger students can learn how to describe and interpret their work, it helps them gain the confidence they need to be in outside professional galleries," he said.

"We also are having a juried competition each annual event now. We don't have prize money but there are beautiful ribbons for first, second and third place, honorable mention and you can just see how much that means to have the peer recognition from the other artists-judges who jury these awards. It lets our artists know that their fellow artists see the meticulous work and degree of difficulty their pieces require to be in a show like this," Talahaftewa added.

One of the most notable aspects of the Hopi Tuhisma is the caliber of the art submissions. Most of the artists represented at this weekend fall show are major awards art winners at either the Hopi Festival, held each July at the Museum of Northern Arizona in Flagstaff or major category or division winners at the Santa Fe Indian Market held each August in Santa Fe, N.M.