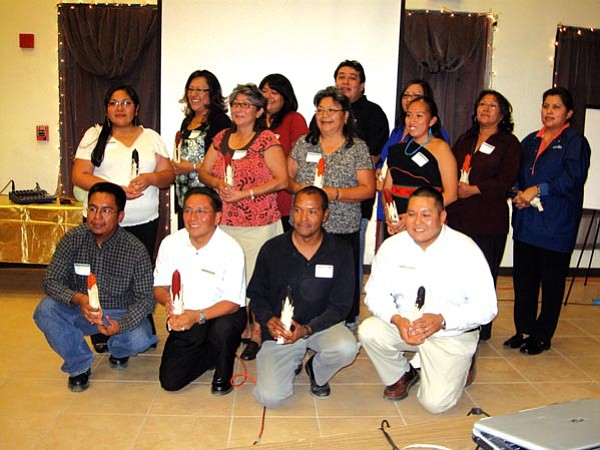 KYKOTSMOVI, Ariz. - On Sept. 15, the Hopi Foundation began a second year of its Hopi Leadership Program (HLP) with an induction ceremony and banquet to welcome 14 new inductees. The ceremony and banquet was held in the Hotevilla Elderly/Youth Center. Purple and gold colored shears draped the windows and were outlined with strands of tiny lights. Handmade candle holders made from paper bags with cut out Hopi designs illuminated the banquet tables. The atmosphere was further enhanced by the soft guitar music performed by Blair Quamahongnewa.

The planning and the decorations were executed by a core group of leadership alumni and volunteers headed by Romalita Laban, with the help of Brenda Patterson, Lori Martin and Vaughn Sieweumptewa. Decorations were provided by Lisa Youvella and the support of the Hopi Foundation staff.

Board of Trustees Chair Marlene Sekaquaptewa offered the invocation and Executive Director Barbara Poley welcomed the leadership inductees and guests followed by the introduction of the 2008-2009 program participants. After the introductions, each member was presented with a wax candle in the shape of multicolored ears of corn by the leadership alumni members and staff. The passing of the candles signified the passing of the torch to a new class of emerging leaders that will be participating in leadership training for the next 15 months.

A traditional Hopi meal was prepared by Kykotsmovi caterer Betty Outah, and served by volunteers of the Hopi Jr. /Sr. High School Culinary Class guided by their teacher Emma Lomakema.

Presentations were made by Patricia Sekaquaptewa, Executive Director of the Nakwatsvewat Institute and DeAlva Honahnie.

Through a written communiqué read by Laban, Sekaquaptewa said, "We recognize that we cannot make the next Hopi person engage in development of reform efforts - individuals have to come to realizations on their own. However, we can engage in active outreach [that is] relevant to current Hopi and village problems, we can engage in transparent and democratic process in running our own organization ... and we can cultivate a professional culture with high expectations and vision."

Her message was specifically for the new inductees/emerging leaders to ponder as they begin this leadership journey.

Honahnie, CEO of the Hopi Health Care Center asked the audience an important question: "Where do we want to go as Hopis?"

Honahnie said she feels it is important to identify what kind of leader you are. There are many leadership styles and you may have to try on a few until you find what works for you.

In addition it is important to look at the difference between leadership and management. There is a big difference. Decide whether to manage or be a leader, for the biggest part of leadership is the human capital.

The evening concluded with advice on "What to Expect/Not to Expect" from Alumnus Vaughn Sieweumptewa. He stated that the three characteristics of leadership that were the most important to him were honor, courage to do the right thing, and commitment.

To end the event Poley expressed her appreciation and gratitude for all the community support of the Hopi Leadership Program. According to Poley, the program would not be what it is without Hopi community interest, input and donations.

The Hopi Foundation Leadership Program, which provides training in core management disciplines and Hopi cultural literacy is made possible through generous support from the Tides Foundation and the Marguerite Casey Foundation.