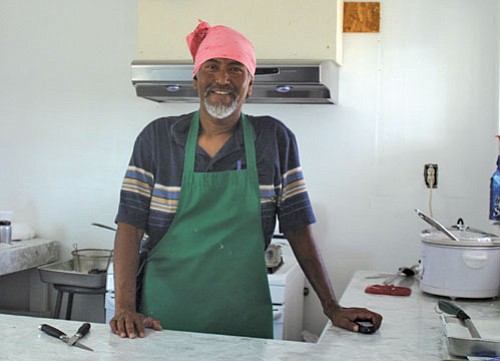 BACAVI, Ariz. - There's a new take out roadhouse grill-sandwich shop in Bacavi village that is accessible on Highway 264, just a couple hundred feet from the main road entrance. The place is called PapaDon's.

Owned by Don Robledo, a tribal member from the Colorado River Indian Tribes in Parker, Robledo is married to a Hopi from Bacavi, the former Leslie Randolph who owns her own beauty salon called Leslie's, located in the shop right next to PapaDon's.

PapaDon's is the named affectionately given to the new eatery by Robledo's grandchildren and it features both basic burgers and fries, along with a taco-burrito like creation called the "Taco Tangle" which has daily-fresh, hand-made flour tortillas made by his daughter-in-law, Marci Kinale.

Come this winter, PapaDon's will start featuring both longer hours and a daily dinner special, like green chili roast beef with mashed potatoes to go.

Robledo's son, Alfonso, who works alongside him daily from 11 a.m. to 8:30 p.m., is the "grill master" for the café that features 100 percent hand pressed beef patties. Throw in a side of chili cheese fries and you got a meal fit for one big Hopi farmer.

Robledo thought about opening a coffee shop at first, but he said, "The only problem with that, is I am not a morning person and coffee shops, well they open really early, so needless to say, that idea was out."

This new shop originally started with Robledo taking his barbecue grill out in his truck, setting up a canopy at various locations on the Hopi rez and selling directly to the public at varied public events. This new grill is just a more permanent expansion on his "peddling" idea.