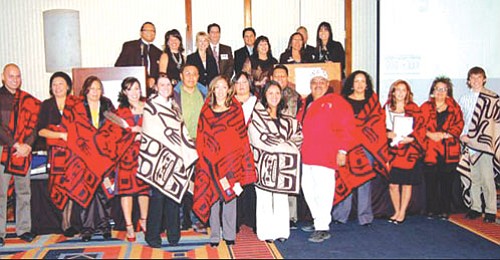 Members of the Education Committee of the 21st Navajo Nation Council attend the Fifth Annual Gala for Rocky Mountain Indian Chamber of Commerce to recognize 2008 American Indian Scholars in Denver. Pictured are board members of the Chamber and scholarship recipients.

"We were honored to have the Navajo Nation join us in recognizing our 2008 American Indian Scholars at the Rocky Mt. Indian Chamber of Commerce Fifth annual gala," said Jackie Francke (Navajo), member of the board of directors for the Rocky Mountain Indian Chamber in Denver. "With Native urban populations growing across the country, it is critical to develop pathways that bridge our tribal leaders with Native urban communities in order to develop economic, educational, and technological opportunities in Indian Country and expand employment opportunities for our Indian scholars as they enter the work place."

Bridging the gap between tribal governments and young Indian scholars was briefly talked about at the gala and several scholars expressed interest in returning to their reservations to help their communities.

"It's important we show our support, especially for our young students attending college off the reservation," said Council Delegate Raymond Maxx.

"This also serves as an opportunity for us to speak with students and listen to their concerns," he added.

Maxx serves as the council delegate for the Coalmine Canyon/Toh Nanees Dizi Chapters.

The Honorable Speaker Lawrence T. Morgan thanked members of the Education Committee for attending the gala on behalf of the Navajo Nation and praised the Rocky Mountain Indian Chamber for their commitment to helping Native American students.

"The cost of education continues to rise each year, as do the requests for scholarships," said Speaker Morgan. "Unfortunately, as a result of the thousands upon thousands of scholarship requests the Navajo Nation receives every semester, the Nation struggles to meet requests from all our students, but organizations like the Rocky Mountain Indian Chamber help to alleviate educational costs for our Native students. I hope other organizations will follow their example."

The delegates received special recognition from the Chamber and several Navajo recipients visited with them following the presentation of awards.

"Several students were happy to see members of the council here supporting their efforts," said Willie Tracey Jr. (Ganado/Kinlichee). "This gave us an opportunity to speak with some of them face to face and listen to their concerns."

The Rocky Mountain Indian Chamber is a 501(c) 6 nonprofit organization chartered to advancing Native American businesses through training, education and resources. Their scholarship program is another avenue, in which they support efforts in advancing Native American communities. In addition, the Rocky Mountain Indian Chamber manages the American Indian Scholars License Plate program under the Colorado Indian Education Foundation, a 501(c)(6), available to Colorado residents.