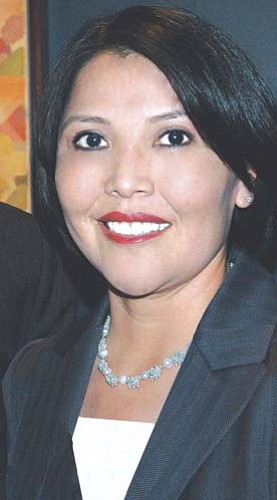 TUCSON, Ariz. - The University of Arizona (UA) Alumni Association recognized the achievements of 26 alumni and community leaders and two alumni council organizations during its 2008 Homecoming Awards and Recognition Ceremony in October.

"Since 1943, The UA Alumni Association has presented accomplished alumni and friends with distinguished awards. Our goal is to recognize alumni, friends of the institution, community leaders, faculty, staff, students, alumni chapters and clubs, and college alumni councils for outstanding achievement and/or service to the UA," said Christopher J. Vlahos, president and executive director of the UA Alumni Association.

Henderson, Diné, who earned a bachelor's degree in biochemistry from UA, was awarded the Professional Achievement Award at the ceremony. Henderson also received the Tanner Award from the American Indian Alumni Club, which is given to a UA American Indian graduate who has demonstrated significant success in their professional career.

Despite humble beginnings and the challenges she encountered during her undergraduate and medical school training, Henderson persevered while remaining rooted in her Native values, beliefs, and traditions - a reflection of the teachings from her parents, grandparents, and elders. An enrolled member of the Navajo Nation from Seba Dalkai, a remote, isolated community located on the Colorado Plateau on the Navajo reservation, Henderson grew up in a two-room house with no running water or electricity with her parents, four brothers, and two sisters. Her grandfather, a prominent medicine man whose influence directed her career toward medicine, lived in a hogan next door.

Henderson eventually went on to earn a bachelor's degree in biochemistry. Upon graduation, she worked as a research assistant at the UA's Arizona Cancer Center and at the chemistry department. She left Tucson and earned a master's degree in public health from Yale University, becoming the first American Indian woman to graduate from Yale Medical School. The school created and awarded her the first Patricia Nez Award, an award given annually to recognize a Yale School of Medicine graduate committed to improving health among American Indian populations.

Henderson is now vice president of the Black Hills Center for American Indian Health in Rapid City, S.D., a Native-owned nonprofit community-based organization, and she is an assistant professor and a Native Investigator Fellow at the Native Elder Research Center at the University of Colorado Health Sciences Center.

For information on the other award winners, visit www.arizonaalumni.com/Awards/.