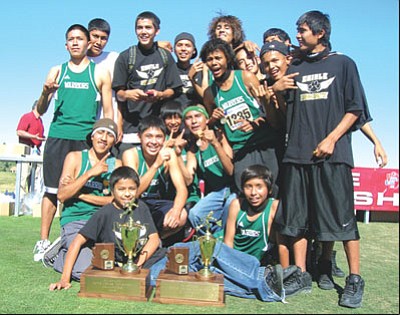 The 2008 3A State Champion Tuba City Warriors and runner-up Chinle Wildcats pose with their team trophies.

Unlike Tuba City's dominating victory in 2007 where the Warriors placed all five scorers among the top 11 finishers, the 2008 victory was a hard-fought battle to the end. Tuba City expected and received a strong challenge from 3A North Region rivals Chinle and Ganado, as well as a seasoned team from Sedona Red Rock.

At least six athletes arrived at the State Championship meet with a chance to win the individual title. Senior Cody Wells of Snowflake was the pre-season favorite after finishing second by 6/10 of a second in the 2007 State Championship Meet. Two track state champions were also running with the 2008 3A two-mile state champ Larry Hermance of Chino Valley, and the 2008 3A 800-meter state champion Jesus Rivera of Sedona. Junior Juan Martinez of Chino Valley was another star who had beaten Orman in the 2007 State Cross Country Championship meet. Despite outstanding competition, Tuba City's Yazzie and Orman were unbeaten by any other 3A runner in 2008, and came in as the clear favorites.

Although it was not part of their race plan, Yazzie and Orman were forced to take the lead from the start. Fearing their breakaway talent, no other runner from any of the 16 teams in the race was willing to run in the front or push the pace. To lead and win a 3.1 mile race from start to finish with well over 100 high-caliber runners drafting behind you takes a great deal of training, patience, and awareness of pace.

At the one-mile mark, Yazzie and Orman held the point position, but Snowflake's Wells, Chino Valley's Hermance and Martinez, and the outstanding freshman from Window Rock Monte Yazzie were sitting on their heels. The team race at the one-mile mark was a nailbiter. Tuba City had the two leaders, but their third man, Mitchell Bahnimptewa was in 21st place, with their next four runners - senior Reggie Poleahla, junior Herschel Lester, sophomore Dennis Klain and senior Darnell Phillips - much further back. Meanwhile, Chinle had four runners in the top-17, and their fifth scoring runner in 26th. At this point Chinle held a narrow lead over the Warriors.

Running shoulder-to-shoulder, Tuba City's Yazzie and Orman broke the race open over the final mile. The pair knew that a 1-2 finish might be needed for a team victory, and despite leading from the start, it was obvious they were saving strength for the final brutal mile. Climbing in elevation for most of the final mile, the pair accelerated and ran the final uphill mile faster than the previous two, leaving two state champions and the preseason favorite far behind by the finish. Using his potent kick, Yazzie sprinted for the finish to win with a time of 16:13. Orman was just a few strides back taking second in 16:16. Last year's runner-up, Cody Wells of Snowflake, appeared broken as he finished third nearly 20 seconds behind Orman. Yazzie and Orman ran the two fastest times ever run by 3A athletes at the Cave Creek Golf course. As they crossed the line, they immediately turned their attention on their teammates and the more important team title.

Led by senior Mitchell Bahnimptewa, the Warriors were mounting an attack over the second half of the race. Bahnimptewa trailed four of Chinle's five scoring runners in 21st place at the one-mile mark. By two miles he was in 16th place right in the middle of Chinle's pack. Over the final mile Bahnimptewa passed Chinle's entire team to finish 10th in 17:02. With three Tuba City runners in the top-10, ahead of Chinle's first runner, the race was nearly won. However, in the sport of cross country five quality runners are needed to win. In cross country the low score wins, and a single poor finisher can score more points than an entire team. If the Warriors' fourth and fifth runners did not move up Chinle could still win.

Four Chinle runners followed Bahnimptewa across the line between 13th and 18th place. The race would come down to Chinle's fifth man versus Tuba City's fourth and fifth runners.

Crucial points were shaved off by Tuba City senior Reggie Poleahla who crested the final hill in 20th place (17:28) having moved up from 29th at the midway point. Two more Chinle runners followed close behind in 30th and 35th, meaning a tie-break would go to Chinle. However, no tie-break would be necessary with Tuba City's Herschel Lester (18:09) and Dennis Klain (18:10) close behind in 38th and 39th place sealing the victory for the Warriors. Tuba City's Darnell Phillips was not far behind, running 18:24 to finish 46th.

Hopi High School is expected to return to the 3A division in 2009, so only one school can become the first team to reach 20 state championship victories. With Hopi returning most of its varsity squad next year, and Tuba City graduating Bahnimptewa, Poleahla, and Phillips, the Warriors will need a miracle to win.