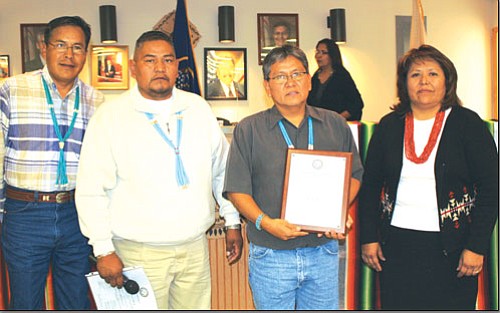 RED MESA, Ariz. - The Red Mesa Chapter celebrated their achievement for being another chapter certified under the Navajo Nation Local Governance Act of 1998 by the Transportation and Community Development Committee of the 21st Navajo Nation Council.

The law recognizes governance at the local level and requires that if chapters want to administer their land, a Community-Based Land Use Plan must be developed and implemented and updated every five years. The plan must also be based on results of a community assessment.

Chapter officials and the community presented the plan to the committee on Oct. 31, where the Transportation and Community Development Committee (TCDC) unanimously voted to grant the chapter its certification under the Local Governance Act on the same day.

"We're here to improve the community," said Russell Gould, chapter president for Red Mesa Chapter, during his presentation to the committee. "Our land, nihi keyah, it is so sacred to us - we're attached to it."

The Red Mesa Chapter planning area is located in the southeastern corner of Utah and northeastern corner of Arizona. The chapter was once part of the Teec Nos Pos Chapter, formally Sweetwater Chapter, before long distances and treacherous roads led the Red Mesa community to request to become a separate chapter. Red Mesa became the first Utah community chapter certified by the Navajo Tribal Council and today is one of seven Utah Navajo chapters.

Upon separating from Sweetwater, Red Mesa joined the Mexican Water Chapter under the leadership of Councilman Little Pouch. When oil was discovered in the area in the early 1940s, revenue was generated and the community decided to get its own chapter certification.

The Red Mesa Chapter was certified in 1965 by the Navajo Tribal Council and the newly elected leaders began conducting meetings. It was their first discussion to begin building their own chapter.

The history of the community was a major part of the presentation and led to discussion of the community's vision for its future generations. The plan included goals and objectives for business and economic development, public safety, education, utilities, communications, housing, grazing, land preservation and restoration, recreation, and about transportation and water rights. Statistical data and graphs were provided to support the plan.

Gould said the land use plan was also designed to preserve vegetation for sheep, horses, donkeys and cows, which still play a vital role in the lives of many traditional Navajo families in the area.

"The residents are instilled with a deep respect and pride for the land," said Council Delegate Kenneth Maryboy (Mexican Water/Aneth/Red Mesa). "That respect is well reflected in the plan and can be seen by the huge turnout we have today."

The Red Mesa Chapter was filled with community members who sat in on the presentation. Council Delegate Davis Filfred (Mexican Water/Aneth/Red Mesa) said the community was heavily involved in creating the land use plan.

"There were a lot of people involved," Filfred said. "We received a lot of input from the community and we provided technical assistance from several entities to make this a strong plan."

After the plan was officially passed by the committee, Kenneth Maryboy stood up and led the community in a standing ovation and applause. A celebratory traditional Navajo meal was provided to those in attendance following the certification.

"Red Mesa Chapter presented a sound and effective community land use plan and I congratulate them on achieving this status," Council Speaker Lawrence T. Morgan said upon hearing about the achievements of Red Mesa Chapter. "With their vision and a solid plan to support it, I am looking forward to the changes the community is going to make. I commend their leaders for getting their constituents heavily involved in the planning process."

"This is a very historic day for the Red Mesa community and Red Mesa Chapter," said Gould. "As a community, we can pursue our own destiny."

With the certification, the chapter can now administer their land pursuant to the LGA and consistent with all other Navajo laws. The certification will allow the chapter to improve community decision making and, under the law, the chapter now has the authority "to review all matters affecting the community and make appropriate recommendations to the Navajo Nation, county and state governmental agencies."