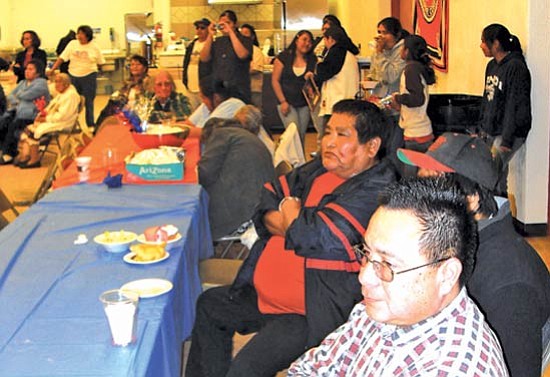 HOTEVILLA, Ariz. - It is an 89-year-old national legal holiday that originally started by observing a day-long armistice on the 11th hour of the 11th day of the 11th month in 1918 during World War I - an implementation of daylong peace activity surrounding the Treaty of Versailles.

In 1919, President Woodrow Wilson declared the first "Armistice Day," which suspended most major American businesses for two minutes starting at 11 a.m. every Nov. 11 and it wasn't until 1926 that Congress made Armistice Day a legal federal holiday and in 1954, Armistice Day was changed to Veteran's Day.

With this, Veterans Day takes on a more significant meaning in Native communities.

An excellent example of this honor and pride was exemplified by a very special group of women at Hotevilla Village, on Third Mesa who held a special dinner and dance in honor of the men and women in their own village membership who have served or are currently serving in the military.

With the awareness of life dangers, war strategy complexities and distance, most American Indians now take pride in either serving their country, or having someone in their family who has served. American Indians are the third largest group that has served its home country alongside African Americans, Hispanics and other minority groups.

With the help of Lorna Quamahongnewa, who directs the Hotevilla Youth/Elderly Group, they managed to rustle up not just a big barbecue meal, but guest speakers, heartfelt public recognition and live music, so everyone had a chance to kick up their heels after their meal.

A number of individuals worked together to shop for the food, cook, serve and then stayed late to clean up afterwards to make this Veterans Day a special event for the soldiers both deceased and living.

There were lists of names of Hopi soldiers printed on special American flag motif paper so that attendees could see who had served in all American wars and during peace time. During the late afternoon dinner and dance, more names were added in pencil or pen by visitors who wanted their own family members that weren't on these printed lists to be recognized.

There was lots of laughter, dancing and sharing of stories of how their husbands, sons, brothers, and uncles, nieces or sisters had decided to serve their country.

While most Hopis don't believe in direct physical violence, there is now a deeper, much more personal understanding of the sacrifice and contribution that soldiers make to serve and protect our country.

Clark Tenakhongva, a Hotevilla veteran who now serves as the Veterans Outreach Counselor for the Hopi reservation said, "From the view of an old veteran, I felt especially grateful that the Ngumunki Committee would honor us in this way. I was emotionally struck by how much we were appreciated by our own village members and family. While war really isn't really a Hopi thing, I believe that most now accept that serving our country is now a part of our history. I thought this was one of the most moving events I have been lucky to be at in my lifetime."