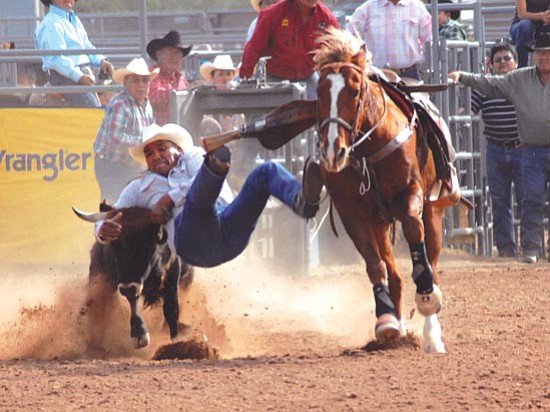 <i>Photo by Geri Hongeva</i><br> Benny Begay competed in the 2008 IIFR as a wildcard contestant from the Navajo Nation Fair and Rodeo.

CHANDLER, Ariz. - The 2008 International Indian Finals Rodeo had 12 Navajo wildcard contestants competing, resulting from their victory at the Navajo Nation Fair and Rodeo.

Three of the wildcard contestants struck gold in Chandler, winning their respective events for this year's IIFR.

Holgate, 19, said she is currently a student at the University of Arizona as a pre-med candidate. A resident of Page, Holgate said the rodeo gene runs in the family and she found her footing at an early age.

"I've been involved since I was small, around the age of four," Holgate said. "My dad started letting me take care of the horses and then he finally let me ride."

Winning the Navajo Nation Fair Rodeo and International Indian Finals Rodeo barrel racing titles in the same year is a long way from those early days as a wooly rider. She said competing is something she envisions for her later years.

A 2008 graduate from Page High School, Holgate juggles schoolwork with the training required to compete on a champion level.

It was her third year competing in the IIFR and she said the fans were a big part of making that happen.

"I like to see people in the crowd who are there just to see people competing. It's nice to know there are people out there who wish you well. I want to do better so I can please them and make it worth their time," she said.

Myron Lee, 24, competed in the steer wrestling event for the IIFR and although he didn't win, Lee said it was honor to compete on behalf of the Navajo Nation.

"It feels good to be a wildcard. It was a big dream come true for me to win the Navajo Nation Fair Rodeo," Lee said.

The toughest rodeo in the business is the Navajo Nation Fair Rodeo he said, because of the competition.

"It's the granddaddy of them all. I look forward to it every year," he said.

Agreeing with Lee was another young Navajo cowboy with rodeo in his blood.

Little competed in the team roping event as a heeler, a sport he's been exposed to since a young age growing up in the Forest Lake area of the reservation.

He cited his father and uncles as important role models in life, teaching him the intricacies of Indian rodeo.

"It goes from generation to generation," Little said. "I wish my late grandfathers Edward Etcitty and Woody Little could have seen me compete.

"Herding sheep, running cattle and watching over your own little ranch and land back home, that's basically my roots," he said.

Three years ago, Little's father helped him purchase a new horse and it was instant happiness.

"As soon as I looked at him, I loved him," Little said of his horse. "We worked with him and within a month, we went back to the Red Rock Classic and I won the money I spent on him back."

Because rodeo fans are the number one reason most cowboys and cowgirls continue to compete on an elevated level, he said the pressure to win is welcomed stress.

"Thank you for supporting us. It makes us nervous and it's an honor to compete in front of you," Little said. "It's something we love to do. We couldn't do anything without our fans."

John Boyd Jr., 50, has been competing in rodeos for over 30 years. Currently a breakaway roper, Boyd has also competed in calf roping and team roping.

Although he's in the twilight of his career, Boyd said it's an honor to still be competing on the level of the Navajo Nation Fair Rodeo and IIFR. Setting attainable goals and seeing them through is the key, he said.

"You set your goals in the beginning of the year and you got to have the desire to accomplish them," Boyd said. "It's been a pretty good year for me, I won a bunch of awards this year."

Getting to the IIFR via the Navajo Nation Fair Rodeo was the goal of another Navajo cowboy.

Alonzo Yazzie, 29, competed in saddle bronc riding for the 2008 IIFR.

Yazzie said one of his heroes in rodeo for the past 20 years has been John Boyd Jr.

"My role model in this sport is probably John Boyd Jr., because he's been involved in rodeo for a long time and he's a good gentleman," Yazzie said.

Yazzie was age nine when he started fostering an appreciation for the sport. Like many other cowboys, he said the best Indian rodeo of them all is the Navajo Nation Fair and Rodeo.

"It's one of the top notch rodeos. If you're top notch, that's where people prove themselves," he said. "People say if you're the best you got to win the Navajo Nation Fair."

Summing up the definition of a cowboy in one word, Yazzie said, "Crazy."