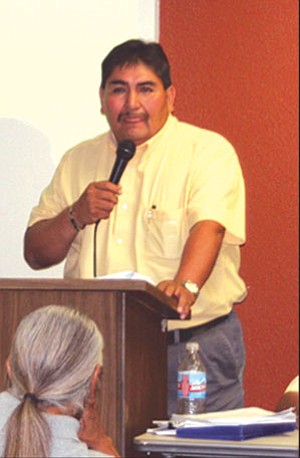 "This is the most offensive and egregious action the Hopi Council has ever taken. This stems from a power grab movement spearheaded by Ivan Sidney, Jerry Sekayumptewa, Ronald Wadsworth, [Vice Chairman] Todd Honyaoma and a few of their followers to take absolute control of the Hopi Tribal government," said Hopi Tribal Chairman Ben Nuvamsa.

With this ratification of the appellate court suspension by Honyaoma and his supporters, the Hopi Council has effectively left Hopi and Tewa members without any legal avenue to dispute actions of the lower Hopi Tribal courts.

The Hopi Council continued to maintain that the appellate court justices had failed to act objectively and impartially in a recent case involving Chairman Nuvamsa.

In a press release dated Nov. 13, former Hopi Tribal Council Representative Jerry Sekayumptewa stated, "Numerous controversies have arisen since the election of Hopi Chairman Ben Nuvamsva which many attribute to a [dictatorial] method of governance. Unrest in the villages has been rampant resulting from misinformation or divisive actions ... apparently intended to prevent the Hopi Council from obtaining quorum. The ... elected leaders have a mandatory and sworn responsibility to meet their governance responsibilities. Participating in schemes intended to disrupt the Tribal Council is not one of them."

The continued division in the Hopi political camps has been nothing short of a "civil war" ever since Nuvamsa took office. It was then that the first resolution came about wanting to oust Nuvamsa for lack of what two council members called "legitimate residency" on the Hopi reservation prior to Nuvamsa's bid for tribal chairmanship.

The Hopi Appellate Court at that time determined that Nuvamsa was indeed qualified to run for office, which upset Nuvamsa's detractors.

Another issue brought about was that the Hopi Appellate Court, two weeks ago, ruled to throw out an arrest warrant against Nuvamsa brought by Honyaoma with the support of tribal deputy prosecutor, Jeff Porturica, and the Hopi Tribe's legal counsel, Scott Canty, that charged Nuvamsa with violating a resolution that called for him to turn in all tribal office equipment in his possession.

Then, at 3 p.m. on Nov. 12, in the midst of oral arguments, the Hopi Appellate Court received the tribal resolution (H-075-2008) that declared two of the justices as invalid and directed Lomayesva's paid suspension.

"This is a direct violation of the Indian Civil Rights Acts of 1968, the United States Constitution and the fundamental principles of a free society," said Nuvamsa in an interview.

"In a society of laws, under the Rule of Law, the people are guaranteed due process the right to appeal. With no appellate court at the Hopi Reservation, the Hopi and Tewa people have been stripped of those fundamental rights by an out-of-control Hopi Tribal Council," he added.

In a separate administrative move by Vice Chairman Honyaoma, the Office of the Hopi Chairman was shut down on the morning of Thursday, Nov. 13.

Rachel Scott, one of Nuvamsa's office staff was the only one at the office taking phone calls that morning, but was informing people that she would only be there for about another hour before the Vice Chairman had told them to leave all tribally-issued property and that they would no longer be allowed into their offices after that morning.

Since Nov. 13, the office of the Hopi Tribal Chairman is no longer open for business, leaving many Hopi and Tewa residents wondering what is going to happen next.