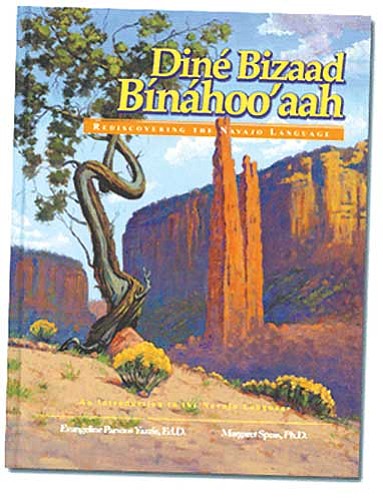 SANTA FE, N.M. - Gov. Bill Richardson traveled to Gallup High School and Farmington High School late last month to talk with students and Navajo leaders about the first Navajo textbook, "Diné Bizaad Binahoo'aah" (Rediscovering the Navajo Language). This is the first time that a text written by a Navajo author has been adopted as a textbook for teaching the Navajo language.

The textbook, written by Evangeline Parsons Yazzie, Professor of Navajo at Northern Arizona University, and Margaret Speas, Professor of Linguistics at University of Massachusetts, was adopted as a state approved textbook in July. School districts may now conduct their own reviews and selections of new texts that will be in the classroom beginning in the 2009-2010 school year.

Both the Gallup and the Farmington school districts have begun to use the new textbook this school year.

"I thank Dr. Parsons Yazzie and Dr. Speas for your commitment to this project and for your dedication to helping preserve the Navajo language," Gov. Richardson said. "One of my first acts as governor was to sign the state's Indian Education Act, which among other things, calls for culturally relevant instructional materials and preserving Native languages. Your textbook is a commitment to our Native American students and the Navajo Nation that your language will continue."

"With this textbook, Navajo students will have the opportunity to understand the history of their family and culture while improving their academic achievement," García said. "Reading scores for Native American students have increased 6 percent over the last four years. We have also increased the number of Native American teachers and administrators by 15 percent in the last four years Language is the key to education goals, and Dr. Parsons Yazzie and Professor Speas have provided a resource for students to better understand language and cultural foundations."

"New Mexico has made great strides towards improving the quality of education for Indian students in the state and providing competitive access to economic opportunity, and prosperity," Warren added.

"Dr. Parsons Yazzie and Professor Speaks have made a huge contribution to the preservation of the Navajo language, a gift to future generations."

There are eight Native American languages are taught in New Mexico public schools with over 5,000 in Navajo language classes. The textbook will provide resources to teachers of Navajo language and also supports the 2007 Amended Indian Education Act, which calls for ensuring culturally relevant instructional materials.