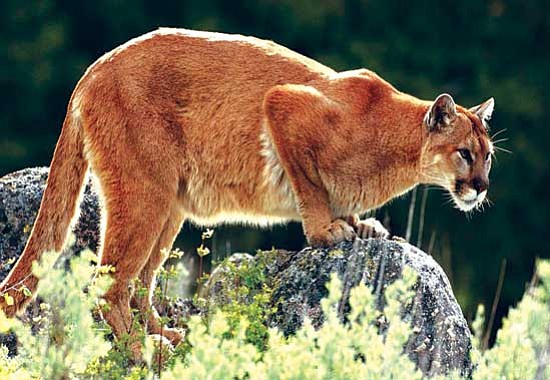 Mountain lions, such as the one in this photo, can grow to an average of about 5-9 feet in length from nose to tail and can weigh between 75 and 160 pounds. Primary food sources include deer, elk, and bighorn sheep, as well as domestic cattle, horses, and sheep. Although rare, mountain lions have been known to attack humans.

TUBA CITY, Ariz - There have been reports of three mountain lions lurking around Pasture Canyon and the area near the fairgrounds.

Bertha Nez-Tsosie, who runs the Tuba City Flea Market, said tracks were seen in the area of her ranch, located about a half mile northeast of the reservoir, earlier last week.

Officers from the Navajo and Hopi ranger services came to the area Thursday, and Nez-Tsosie said she showed them around. However, because of the heavy winds, she said she told the officers any tracks most likely have been blown over.

Nez-Tsosie said her husband, Clyde Tsosie, tried backtracking the lions on Tuesday and discovered three sets of tracks side by side.

"That's how he knew there were three of them," Nez-Tsosie said. "There was a big one, a small one and a smaller one - a daddy, mommy and baby."

Other residents, including Terry Yazzie and Ray Manygoats, have also seen the tracks, she added.

Her husband was first made aware of the tracks by another neighbor, Ed Whitethorn, Nez-Tsosie said.

None of the other witnesses could be reached for comment.

As she began asking people in the community if they'd heard any more about the mountain lions, Nez-Tsosie said she realized that no warning had been going around.

"I thought, 'Come on, these people are not warned.' I was concerned about the community and the livestock," Nez-Tsosie said. "People need to be warned before something tragic happens."

Pasture Canyon is heavily wooded, and a place where the big cats might roam.

"Normally, these mountain lions would not be around here unless they're hungry," Nez-Tsosie said.

To report sightings of any mountain lions in the area, contact the Tuba City Police Department at (928) 283-3111.