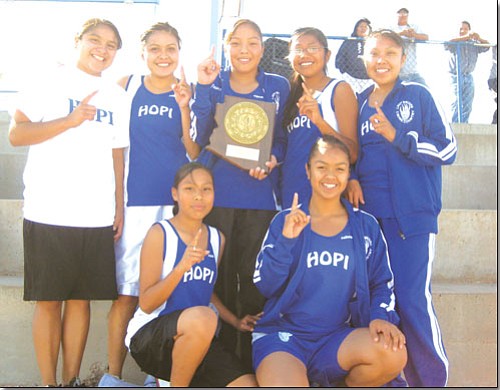 Andrea Klimowski from Northland Prep was the regional girls champ with a time of 20:20.

"The girls were motivated and focused, but there's always room for improvement," she said. "Some didn't meet their goals and that's what we're working on."

Coach Lomakema said all of the girls ran well, but some perceived that they could have had better times. She said the girls can improve by closing the gaps between the runners.

"Everybody was close together at regionals. They showed what we're trying to do. We clustered together better than I thought," she said.

Coach Lomakema noted that all her runners were academically eligible for regionals. She said that she requires that they go to tutoring and if they are caught up in their other classes they can come to her classroom to work on whatever they want.

Coach Lomakema said she talks to her runners on a daily basis about the need to stay away from drugs and alcohol.

"It's a big part of the philosophy of our program to be drug and alcohol free. Look around at the community and read in the newspaper about the displays of drug and alcohol abuse and how it negatively impacts the community," she said. "Anything can happen because of one bad mistake. We don't want that."

Coach Lomakema said athletes should remain on the good path by respecting their bodies.

She said the Lady Bruins have worked hard this season and she is proud of what they have accomplished as a team.

Rick "The Legend" Baker, coach of the Hopi High boys cross country team, said the Bruins ran well and to their potential.

Baker is called "The Legend" because under his coaching, the Hopi High boys cross country team has won 18 straight state titles.

"We want the other runners to run close to Ronnie," he said.

Like the girls, Hopi High boys had all of their runners academically eligible. Coach Baker sends his runners to tutoring every day, but also encourages them to get all their assignments done on time.

"I tell them to do whatever their teacher asks," he said.

Coach Baker tells his runners to behave and avoid situations where they have to defend what they're doing.

"I tell them to stay away from drugs and alcohol because it's harmful. That's why it's illegal," he said. "It doesn't help to put foreign things in your body."