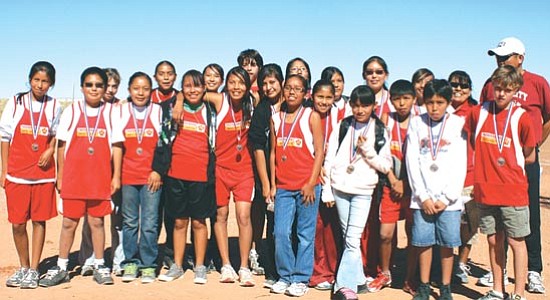 The top finishers were Brianna Loughran coming in first, followed by Mikayla Hudgins in second place and Ashley Onsae in third. These three athletes helped in achieving the first place team award once again.

Cross country is a team sport where all runners practice hard and are given the opportunity to run their heart out at all meets. There are no set limits in cross country because every meet is slightly different which means that the runners must make every practice count.  These remarkable ladies proved that hard work does pay off when they were faced with the Wildcat's famous Hamburger Hill in Tonalea. As a result the varsity girls took first place and like a charm, the girls' junior varsity took first as well while the varsity boys finished in fourth place.

"Each runner has demonstrated their highest point to run and still had the desire to improve themselves," said Coach Coolie.

Despite minor injuries, the T-Birds have pulled off yet another brilliant season, bringing their season to a championship close. They were favored to win in the Arizona State Junior High School Cross Country Championship race on Nov. 1 in Phoenix. While others were out trick or treating, the top seven girls and boys varsity runners traveled to compete.