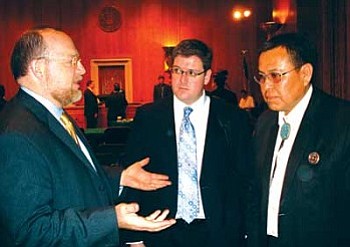 WASHINGTON, D.C.- The Senate Committee on Indian Affairs held a hearing May 15 on a Senate bill that aims to repeal a section of U.S. law that will permanently remove the Bennett Freeze.

"Thank you for this opportunity to speak about [this] legislation (Senate Bill 531) that would formally strike from the U.S. code the provisions authorizing a development freeze in the western portion of the Navajo Nation," said Raymond Maxx, chairman of the Navajo-Hopi Land Commission.

"Because my family was relocated twice by the federal government and now live in the former Bennett Freeze area, I have firsthand knowledge of what conditions are like," Maxx said.

"For the families who live in the former Bennett Freeze area - so long as the authority for the freeze remains in the U.S. Code - there remains a fear that it could be re-imposed," Maxx stated. "Passage of SB 531 would send a powerful signal that all parties have begun the process of moving on from the divisive disputes of the past."

During the hearing's question and answer session, Maxx outlined the need for infrastructure, housing, and schools in the former Bennett Freeze area.

Following the hearing, Maxx reiterated his request to the Senate staff to hold a field hearing in the western Navajo region, inviting the Senate Committee on Indian Affairs to observe the conditions for themselves.

A markup for the proposed bill is the next step before it is free for consideration on the Senate floor.