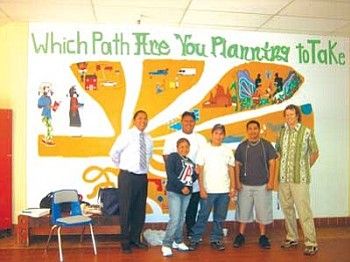 Students stand in front of a mural at Hopi High School that shows the careers and cultural ways that students might want to go and the choices they will have to make (Courtesy photo).

A mural at Hopi High shows the careers and cultural ways that students might want to go and the choices they will have to make.

Hopi High's Individuals with Disabilities Education Improvement Act Director Darold Joseph said that the idea started off between him and Transitions Counselor Chris Margeson to let the students know about the choices they can consider after high school.

"The intent is wanting to make the mural visual and show it to the whole student body," Joseph said.

Joseph said that the project started during mid-April and he hopes it will be completed before school is out. Joseph, Morgeson, along with Hopi High students Samuel Masayumptewa, Junell Puhuyesva, Isaac Lomawaima, who are seniors, and Evan Martin, a junior at Hopi High, helped worked on the mural.

"One way students will benefit from the mural is because students converse with each other." Joseph said. "They see the paths like college and culture. You can take one or more paths. The individual determines their own direction."

Joseph said the mural empowers students to understand that they have choices in their lives. He also said that the supplies were paid out of the IDEIA department.

"The cost is not a factor, but the rewards are going to be great," Joseph said.