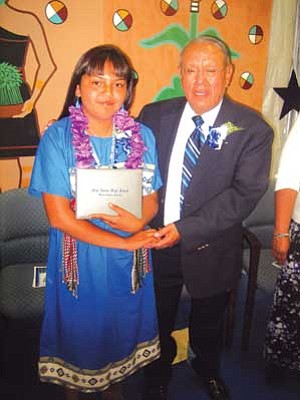 "If anything is not right, don't do it. Walk away. Be smart. Stay away from alcohol and drugs," he said. Povatah, who has taught and coached for 43 years, said alcohol and drugs ruin brain cells.

"The brain is the most important computer you have," he said. "If you're using drugs and alcohol then stop now."

Povatah, who came out of retirement this year to coach girls basketball at Hopi Junior High, urged the students to use education as a positive influence to help their family, their community and their tribe.

"Education is a lifelong learning process," he said. "[It] is an investment that brings great rewards. It opens doors that otherwise would not be open."

Povatah, who has a BS in education from Northern Arizona University, told the students that the most powerful words are "I can." He added that each morning they should say, "I'm going to have an I can day."

Povatah told the students they should encourage one another.

"If one of your classmates is upset or unhappy, help them to be happy. Lift them up," he said.

Povatah said he had many memories in the Hopi Junior High gym, where some made him laugh and some made him cry. He added that the Hopi High girls freshman basketball team will be "darn good" next year because the eighth grade girls finished second in the state this past season.

He recounted how Principal Albert Sinquah came to his door three times this year asking for him to coach the team before he caved in.

"I was in my rocking chair," he joked.

But, more importantly, he said Sinquah never gave up and he told the students never to give up as they move forward with their education.

"Work hard to bring your grades up. It will help you with high school and life. Be glad of the support you receive from any relatives and thank all who helped you get this far," he said.

Povatah closed by telling the students that only hard work brings success.

Co-valedictorian Brooke Ann Namoki thanked her dad for helping her with her work and giving her lectures; and her mom for attending all her banquets. She thanked the rest of her family for helping her. She especially thanked her teachers for their work.

"Junior high is just a stepping stone," she said.

Co-valedictorian Hayley Keith said it is an honor to represent her class as they celebrate the joyous day.

"It was not without guidance from the teachers," she said.

Keith said the biggest challenge students make is their choices. She quoted a Harry Potter character who said more can be determined about people by the choices they make rather than their abilities.

Salutatorian Kachina Renea Jenkins said she was excited and nervous to have the honor of serving as salutatorian. She told her classmates to work hard and strive to achieve their goals.

Jenkins, who excelled academically and athletically, said that if anyone is getting straight A's and their classmates make fun of them that they should not listen because they will be the ones who accomplish more.

Jenkins thanked teachers and coaches for pushing her.

She praised her grandparents for helping her through this past year.

"Without them I would not be on track," she said. "Now we're freshmen."

Sinquah noted that the ceremony was brought inside because of the weather.

Sinquah commended the students for their effort, but emphasized that their educational success was due to a family effort.

"Students rely on the family and the home for their efforts. Without that it's hard, especially in adolescent years," he said.