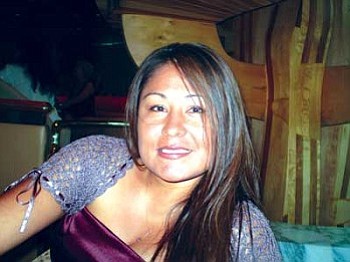 FLAGSTAFF, Ariz. - As a child growing up in and around Farmington, N.M., Stefanie Raymond-Whish always knew that she would go to college. What she probably didn't realize at the time was that she would go on to make local history by becoming the first Navajo woman to graduate with a Ph.D. in biology from Northern Arizona University (NAU).

Raymond-Whish, who also conducted her undergraduate work at NAU in zoology, credits her upbringing for her desire to go to college. "The biggest influence that I had in pursuing higher education is my parents," she said. "I grew up with the expectation that I would go and finish college. I never considered anything else."

She also credited her interest in science as motivation for her success, stating that she had initially wanted to be a veterinarian, but after doing some research at Dr. Catherine Propper's laboratory during her senior year in college, it completely changed career paths for her.

Today, Raymond-Whish is one of about a dozen NAU students and researchers who have dedicated themselves to the study of uranium and cancer and how the two may be interrelated.

With the occurrence of breast cancer in Navajo people at an all-time high, Raymond-Whish and her fellow researchers sought to figure out whether exposure to uranium could be the underlying cause. Albeit, this was more of a personal goal for Raymond-Whish as her grandmother and mother have both been afflicted by breast cancer - her mother is a 19-year breast cancer survivor.

So, with her interests firmly rooted in science as well as her Navajo culture, Raymond-Whish laid the foundation to seek the answers to her main question - how and why breast cancer rates have more than doubled for the Navajo people over the past 30 years.

With renewed interest in the mining of uranium, there are still many obvious concerns with proposed efforts to mine uranium on Navajo lands.

Since the 1960s, hundreds of Navajos have died as a result of having worked in uranium mines. Many of these Navajo miners were exposed to dangerously high levels of radioactivity in mines and mills. Because of tough economic times, many Navajo families were simply thankful when uranium mining began on the reservation because it provided employment opportunities. Little did they know of the dangers and eventual health problems (including cancer) they would face.

Now, the Navajo people are much more aware of the dangers of uranium mining and how it greatly affects their health and way of life.

In May of 2005, Navajo Nation President Joe Shirley Jr. enacted the Diné Natural Resources Protection Act, which makes illegal any type of uranium mining and processing efforts on Navajo lands. He defended his action by stating, "As long as there are no answers to cancer, we shouldn't have uranium mining on the Navajo Nation."

In May of 2007, the U.S. Environmental Protection Agency (EPA) collaborated with the Navajo Nation EPA to clean up contaminated soil around five Navajo residences in close proximity to an abandoned uranium mine located near Church Rock, N.M. During the cleanup process, over 5,300 cubic feet of radium-contaminated soil was removed from around the home sites. For about 24 years, contaminated water discharged into the arroyo that ran past several homes, and contaminated soil was also spread by the wind and water run-off. It is not known if the health of these families was affected by the contamination.

The research conducted by Raymond-Whish and her colleagues has not yet found any definitive answers on how to resolve the high cancer rates among Navajos, but their research may shed some light on how the cancer occurs in the first place.

"I don't know definitively if uranium is the source of the dramatic increases in cancer rates in Navajos, but I do think that [it] may be possible," she stated, adding, "I think it is too early to definitively say that the findings of my research as a result of uranium exposure are related to the health disparities that many Navajos are experiencing. However, it is my hope that the results [of] my studies will be a strong foundation to ... determine if and how uranium might be linked to various health problems."

When asked if her research could help in thwarting renewed efforts to bring back uranium mining to Navajo lands, she explained, "I am a scientist, not an activist. I do my research and can tell people what it means, but I don't have the answers on how to fix the problems. That doesn't mean I don't think there is a solution."

The best of both worlds

Raymond-Whish takes a very humble stance when it comes to her distinction of being the first Navajo woman to graduate with a Ph.D. from NAU.

"I did not continue my education and get my degree to set any type of precedent. I am just a person doing what needs to be done in order to have the career that I want."

As a wife (to husband Bryan) and mother to two children, Raymond-Whish plans to continue her breast cancer research and feels that her work could be of potential importance in sustaining the Navajo way of life.

Humbled by her newfound acquaintance with other Navajo Ph.D. recipients, Raymond-Whish credits her mentors and NAU for their commitment and devotion to her success. She encourages students to follow through with college, elaborating on the old adage, "You can do whatever you want."

"My parents had instilled in me that I could do anything that I wanted and they have always been there to encourage and support me. It may take a lot of work, but anything is attainable. Don't be afraid to ask for help when you need it ... There are so many people that are available and willing to help. You just need to ask," she stated.