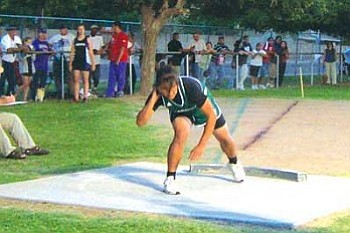 MESA, Ariz. - The Tuba City High School men's and women's track and field teams qualified 18 athletes to compete in the 2008 3A State Track and Field Championship Meet held on May 9-10 at Mesa High School. In spite of a case of the flu sweeping through several members of the team leading up to the meet, Tuba City's men placed eighth and the women 12th out of the 28 teams in the 3A Division.

Few who witnessed the track meet will forget the performances of Tuba City's Ryan Yazzie. The sophomore utilized electrifying finishing speed in the latter stages of his races to capture a state championship title in the 1,600-meter, four medals, and the attention of all watching. Yazzie single-handedly scored 22 of the Warriors' 34 team points.

The means Yazzie used to win his state championship title in the 1,600-meter run, the metric equivalent of the mile, caused the race to become the most talked about event of the meet.

With one lap to go in this four-lap race, Yazzie sat in fourth place, a full 50 meters behind the leader and pre-race favorite Larry Hermance of Chino Valley.

With 300 meters to go Yazzie began to accelerate, passing two of the three runners ahead of him along the backstretch. At the top of the final straightaway Hermance still appeared to have the race in hand with a 20-meter lead on Yazzie. Coming off the final turn, however, Yazzie exploded. With the stands along the home stretch full of Chino Valley, Tuba City and hundreds of non-partisan fans, the roar from the crowd was a combination of surprise, shock, exhilaration and awe. Using a smooth, long stride that quickened with every step, Yazzie bolted down the homestretch to turn a huge deficit into a convincing three-second victory in a time of 4:26.12. His final lap was timed in 59 seconds.

Freshman Billy Orman ran an outstanding race in his state championship debut to capture the final medal in eighth place (4:38.22) just ahead of his disappointed teammate Lance Williams in ninth (4:41.00).

Yazzie later used similar tactics to place second in the 3,200-meter run. Hermance, an even heavier favorite in this race, took control of the race in the second lap of this eight-lap race. Over the next mile, Tuba City's Lance Williams, last fall's 3A State Cross Country Champion, was the only runner able to match the brutal pace set by Hermance. Yazzie had run this race only once this season and twice in his life before the state meet, and his inexperience showed as he fell well behind in the first half of the race.

With three laps to go Yazzie finally began to move up in the pack. Once again, Yazzie unleashed unheard of speed in the final lap of a long distance race, covering the final lap in 60.4 seconds. This time around Yazzie's strong finish was close, but not fast enough to catch the victorious Hermance. Hermance placed first in 9:40.29, with Yazzie second in 9:45.18. Williams finished with a personal best time of 9:53.04 in fourth place. Freshman Billy Orman narrowly missed his second medal of the meet placing ninth in 10:08.20.

The Warriors' came into the meet as the two-time defending state champions in the men's 4x800-meter relay. With 17 quality teams lining up at the start of this race, and the flu affecting two of the four members of the Warriors' squad, a third straight victory would be an enormous challenge. Safely passing a baton from teammate to teammate only lengthened the odds. Senior Lance Nez led off the first leg of the race. As the starting gun sounded, Nez got out perfectly looking relaxed and fast near the front of the seventeen tightly packed runners. But just 150 meters into the race, as Nez pumped his arms to the quick rhythm of the race, his baton hand swung down as a runner from Show Low's baton hand swung up.

The baton's collided and Nez's baton was knocked from his hand. The crowd gasped as Nez hit the brakes, spun around, ran back to pick up the baton, accidentally kicked it another few yards further away, spun back around, and tripped. As he lifted himself from the track, the nearest runner at the back of the pack was at least 50 meters in front with the leaders much further ahead.

Victory was gone, and a medal appeared to be lost as well, but Nez did not give up. He sprinted forward, and by the time he had completed his two-lap leg he had regained contact with the pack and passed two competing teams.

Last fall's cross country state champion Lance Williams took the baton next and quickly ran past overmatched runners. Williams scorched six teams in his first lap, and another three teams in his second lap. By the time Herschel Lester got the baton for the third leg of the race, the Warriors were back in medal contention in sixth place, but the nearest runner was still 40 meters ahead, and the lead pack still further. Lester made up at least 30 of that 40-meter gap, and handed off the baton to Yazzie closer, but still in sixth place. Yazzie was now 10 meters behind his rival Andre Sample of Ganado in fifth place.

Yazzie had beaten Sample by just 9/100ths of a second in an 800-meter race earlier in the season, but Yazzie has improved greatly since then and he easily made up the 10 meter deficit and added another 10 meters on Sample before the finish. The Warriors' comeback earned them a fifth place medal, 4 points for the team and the wonder of what might have been. The Warriors final time of 8:32.18 was less than 11 seconds behind the winning time of 8:21.55.

Senior Vince Begay fought through a sore shoulder to place sixth in the discus with a toss of 127' 11", three feet short of his season best. Begay finished with a remarkable senior season in which he improved his personal best mark in the discus (130' 11") by nearly 25 feet, and his personal best in the shot put (42' 7") by more than two feet. Yazzie also added a sixth place finish in the 800-meter run (2:01.29) to complete the scoring for Tuba City.

Tuba City's Trisha Curley came into the meet ranked No. 1 in the shot put among 3A women, but woke up on the morning of the preliminaries with a slight fever and flu-like symptoms. Although far from peak form, Curley was easily able to qualify for the next day's final.

In the final Curley performed well, but placed a disappointing fifth with a put of 33' 8.5". Adding to the disappointment, Kali Gajewski of Sedona Red Rock's winning mark of 35' 4.75" was more than a foot short of Curley's season best. However, Curley is just a sophomore with an extremely bright future in an event that is typically dominated by more experienced upperclassmen.

The Lady Warriors are full of promising young stars - particularly in the distance events. Freshmen April Tracy and Tatiyanah Johnson were responsible for the remainder of Tuba City's scoring on the women's team. Under the lights on Friday night, Tracy ran a personal best 12:18.04 to place 5th in the 3,200-meter run.

Johnson and Tracy combined with freshman Jennifer Williams and sophomore Kara Dugi in the 4x800-meter relay which also missed a medal by one spot taking ninth in a time of 10:34.56. Although just a sophomore, Dugi was the veteran of the group. A near season-long knee injury prevented Dugi from attaining peak form, but the four stars look to form the heart of an outstanding distance crew for years to come.

Living the team motto of being a good person first, good student second, and a good athlete third, Tsosie is currently ranked second in the senior class and will be co-salutorian of the Class of 2008.