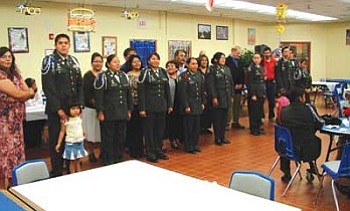 The Hopi High JROTC cadets pose for a photo.

On the evening of Saturday, May 3, the Hopi High Junior Reserve Officers Training Corps (JROTC) celebrated their Sixth Annual Military Ball. The cadets wore their green uniforms one last time while parents and guests were in formal wear. The night started off with the receiving line. Major (R) Taylor, Sergeant First Class (R) Nance, Cadet Lieutenant Colonel Carl, Cadet Major Lomakema, Cadet Command Sergeant Major Sockyma and Cadet Major Talayumptewa shook the hands of every parent, guest, and cadet that arrived that night. After everyone was greeted, Albert Sinquah, principal of Hopi Jr. High, opened with a prayer in the Hopi language. The color guard then posted colors.

When dinner was served, the Battalion Commander and his staff welcomed everyone. The guest speaker for the evening was Dale Sinquah. He retired from the Army and has received a number of awards. He has spent a lot of time with the cadets, helping them with their movements and giving them advice on how to do certain things. Subsequent to Sinquah's speech was the promotion of the 2008-2009 Bruin Battalion Staff. Promotions included: Cadet Major Marlana Talayumptewa, Executive Officer; Cadet 2nd Lieutenant Dominique Halwood, S-1; Cadet 2nd Lieutenant Amber Naha, S-2; Cadet 2nd Lieutenant Robyn Wadsworth, S-3; Cadet 1st Lieutenant Angelo Dixon, S-4; and Cadet Captain Tasha Labahe, S-5.

Following these individual awards were the team awards. The Color Guard, Drill Team, Raiders, and Marksmanship members all received an award for their dedication to the teams they participated on.

After retiring the colors, the cadets and welcomed guests went to the gymnasium where DJ Noyz was playing his mixes of hiphop, country, and slow jamz. The night was filled with many proud parents and guardians. Congratulations to all the cadets for accomplishing so much in 2007-2008.

The Drill and Color Guard teams are far from over though. The Color Guard members will be posting colors at the Hopi Junior High Promotion, the Cedar Unified School Promotion, and the Hopi High School Graduation Ceremony. The Drill Team will also be participating in the High School Graduation Ceremony, where they will be conducting the Queens Hand Salute.