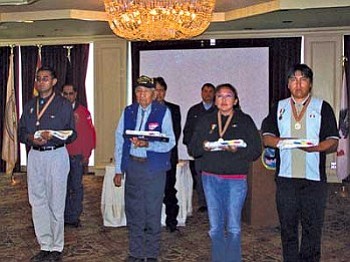 Honored Navajo veterans (pictured from left to right): Arnold Maryboy, Bruce Williams (WWII veteran), Yolanda Swift, and Dustin Bedonie were honored May 2 with the presentation of an American flag and pins in appreciation for their devoted military service (Photo by Somana Yaiva/NHO).

FLAGSTAFF, Ariz. - The Department of Navajo Veteran's Affairs, Western Navajo Agency Veterans Organization recently hosted a workshop to address federal benefits for veterans and their dependents. The event was held in Flagstaff to spread information about what types of services are offered to Navajo veterans upon their return home.

The workshop was attended by close to 200 Navajo veterans, their spouses and families. All branches of the military were represented, with a majority of the veterans coming from the Army, Navy and Marine branches. There were veterans from Vietnam, WWII, the Korean War, and peacetime veterans in attendance as well.

Also in attendance were several Gold Star Mothers, who are mothers that have lost a child during wartime. There was even a Blue Star Mother, a mother who has a child currently serving in the military.

Among the topics covered during the workshop were Arizona state benefits for Navajo veterans, retired veteran's benefits, and Navajo Nation veterans benefits. There were even representatives from the Prescott Medical Center who conducted health screenings for the veterans who were attending the conference.

Many of the veterans and their families shook hands with the honorees as they made a round of recognition for them. The Gold Star and Blue Star Mothers hugged and whispered prayers to each honoree and many expressed heartfelt thanks as they passed by.

In attendance for the Friday session were the Navajo Nation Honor Riders. The riders come from the Navajo and Hopi reservations and travel to various events all over the nation to spread the message that "Freedom Is Not Free." The riders have many veterans who ride with the other motorcyclists to show support and respect for the servicemen and women. Among the group of riders at the event were Byron Poocha, U.S. Marines Corp.; Nolan Dempsey; Bob Emerson, U.S. Marines Corp.; Reggie Curry; Ken Goldtooth and Andrew Kelly Jr., U.S. Army.

The Honor Riders came from Tuba City to Flagstaff in a motorcycle brigade to honor the veterans who were attending the meeting and for those who are still serving in the war.

Also in attendance were the Joe Tohannie Apache Crown Dancers who provided the entertainment. Honor songs and memorial songs were presented by Rivertail.

"I can't even begin to put into words what it is you provide for your communities. We are extremely grateful to have you here with us to honor our returnees today," remarked Melvin Nez, the event's emcee.

For more information about the Department of Navajo Veterans Affairs, Western Navajo Agency Veterans Organization or for information on what types of services are available for Navajo veterans who live in the Western Agency, contact Gene Y. Little or Melissa Natoni at (928) 283-3030 or (928) 283-3029. You may also write to: Western Navajo Agency, P.O. Box 1259, Tuba City, AZ 86045 or e-mail dnvawestern@yahoo.com.