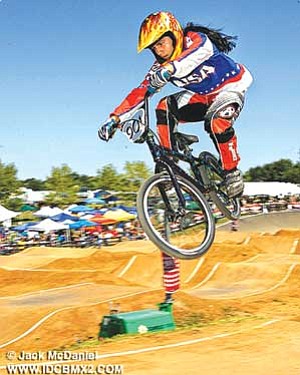 Blake Foxx, Navajo/Hopi, is caught in mid-air as he races a BMX course. Foxx, age 15, is seeking to compete in the UCI BMX World Challenge in Taiyuan, China and win the world championship. Foxx has been active in BMX racing since the age of six (Photo courtesy of Lori Foxx).

QUEEN CREEK, Ariz. - Blake Foxx, Navajo/Hopi, from Queen Creek has qualified to represent the United States at the upcoming UCI BMX World Challenge in Taiyuan, China from May 27-June 1.

On March 29, Foxx traveled to DeSoto, Texas to compete in the 2008 USA Cycling BMX National Championships. Placing in the top eight at this event qualified riders to be a member of the USA World Challenge Team. Foxx took a podium position, placing third at the event, earning him the bronze medal in the 16-year-old class. Although he is only 15, he had to compete as a 16-year-old, since it is based on the rider's age as of Dec. 31.

This is an especially exciting year for BMX racers, as BMX is making its Olympic debut this year as a medal event. The BMX World Championships will be a pre-event, leading to the Olympics in August.

Unfortunately, Foxx was unable to compete for a spot on the 2008 US Olympic team since he is only 15 and the U.S. Olympic Committee has determined that riders must be a minimum age of 17 to compete for a position on the team. The World Challenge in Taiyuan, China is the next best thing for those riders unable to qualify for the Olympic team. Foxx will be racing against the best racers from countries all around the world. He sees his biggest competition coming from the countries of Canada, France and Brazil. His ultimate goal is to come home from China with the World Title.

Foxx began his BMX racing career at the age of 5, quickly moving from Novice to intermediate, and then within six months, he advanced to the expert class. He travels all across the United States with his parents and on many occasions is also accompanied by his grandparents who live in Tuba City. They travel from California to North Carolina and everywhere in between. Last summer, he also competed as a USA World Team member in Victoria, British Columbia.

Foxx currently races two separate classes, the 15 expert class (20-inch wheel bicycle) and the 15 cruiser class (24-inch wheel bicycle). He also races in both the American Bicycle Association (ABA) and National Bicycle League (NBL). Racing in both organizations keeps him on the track 52 weeks a year. He generally races two to three days a week at local tracks in Arizona or at Nationals in different states. He practices at the local track, Chandler BMX, one to two times a week.

Foxx is very dedicated to his sport, training seven days a week - two days with his trainer and the other five days on his own doing speed and agility exercises, weight training, sprints, and plyometric drills. He is also very conscious of his eating habits, sticking to a strict healthy diet, limiting fats and staying clear of sweets.

Foxx is a student at Desert Ridge High School in Mesa and has a 3.5 GPA. His plans are to graduate from Desert Ridge in the 2008-2009 school year. This would allow him to complete his college studies in time so that he would be able to concentrate on making the 2012 Olympic team. But in the immediate future, he is concentrating all his efforts on the World Challenge race in China.

Unfortunately, USA Cycling does not pay for Challenge racers expenses to compete in China. Foxx and his family must pay all entry fees, visa fees, airfare, hotel, meals and other expenses. As you can image, this is not a small feat. We welcome any help from individuals, businesses or groups to help this young Native athlete with this rare opportunity.

About the sport of BMX

The sport of BMX (bicycle motocross) began in the early 1970s. It was a sport where kids riding their bicycles off road in vacant lots and fields would race each other, with not much competition, but a lot of fun. Today, the sport of BMX racing has swept the country and the world. There are over 150,000 riders of all ages racing in organized races at permanent tracks across America. Races are organized according to age group and skill level, so everyone gets the opportunity to compete on a fair and competitive basis. Racers start from a starting gate, following a cadence and maneuver their way around a dirt track made up of different shaped and sized obstacles, in a race to the finish line. BMX racing is clean, exciting fun that whole families can get involved in. The two major BMX organizations in the US are the ABA (American Bicycle Association, based in Chandler) and the NBL (National Bicycle League, based in Hilliard, Ohio). In August, BMX racing makes its debut as an Olympic sport in Beijing, China.