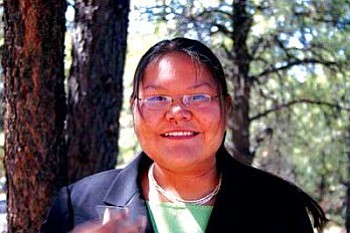 FLAGSTAFF, Ariz. - Shannon Davis, an accounting major, and Robert Jumbo, an accounting and business management major, both from Chinle, were two of 39 graduating seniors to be awarded the prestigious Gold Axe Award from Northern Arizona University (NAU) at an April 15 ceremony in Flagstaff.

Davis and Jumbo were recognized for their contributions to the university in the areas of academic performance, leadership and service to the NAU community.

"The Gold Axe Award has been a symbol of great recognition at Northern Arizona University since 1933, a year after our student body adopted the axe as the symbol for Lumberjack athletics," said Kevin Gemoets, coordinator for the Office of Student Life, which presents the award along with NAU's Office of Alumni Relations.

"Because it is such a coveted university honor, most recipients list this award on their resume or vita throughout their professional careers," he added.

More than 2,650 Northern Arizona University seniors and graduate students will be conferred with their bachelor's, master's and doctoral degrees at graduation ceremonies on May 9 and 10. For information, visit www.nau.edu/graduation.