Indigenous people from North America say 'No' to fossil fuels 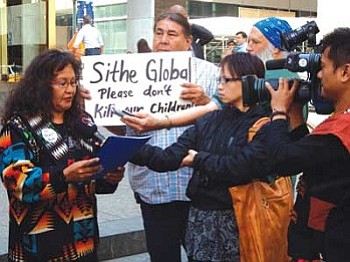 A supporter of Dooda Desert Rock speaks to members of the press regarding concerns over the proposed Desert Rock Energy Plant in northwestern New Mexico. A letter was delivered to Sithe Global informing them that a number of Navajo people are not in support of the project.

NEW YORK CITY - A delegation of Indigenous people from around the world rallied at Sithe Global LLC in New York City to express their concerns about the proposed Desert Rock Energy Project and its potential effects on the local Navajo people.

Elouise Brown, President of the Dooda Desert Rock committee and Enei Begaye, Executive Director of the Black Mesa Water Coalition, attempted to deliver a letter to Sithe telling them that local people do not support the project.

News reporters accompanied the two into the building, who were then ordered to leave. Brown and Begay, both tribal members of the Navajo Nation, asked to deliver a letter to Sithe Global. The receptionists refused to deliver the letter, but directed Brown and Begay to a messenger center at a different location, where they sent the letter.

"I don't understand how the proponents of the Desert Rock Energy Project from our Navajo Nation can do business with a corporation that will not speak to [tribal] members ... who would be directly impacted by the project," said Brown.

Outside Indigenous peoples from all over the world were in New York for the United Nations Permanent Forum on Indigenous Issues. They rallied in solidarity with the Dooda Desert Rock Committee. Brown and Begay were part of the Indigenous Environmental Network delegation. Together, the group profiled the disproportionate impacts their communities face as a result of the expansion of fossil fuel development in their homelands, resulting in contamination and depletion of water, compounding climate change, and exacerbating health impacts.

"These are resource wars," Begaye said. "These companies are occupying sovereign Indigenous territories, and not just in Iraq. In this country, from the Navajo Nation to the Arctic, the Indian wars continue."

More information about this initiative can be found at www.dooda-desert-rock.net.