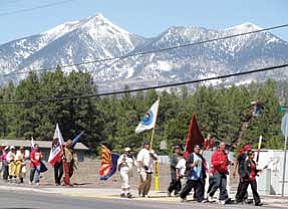 Longest Walk 2 participants walk toward Flagstaff along Route 180. Upon reaching Flagstaff they had walked 980 miles in 39 days.

Far ahead of a crowd of a few dozen Long Walkers, a Japanese man waved a safety flag. He wanted to talk, he wanted to be heard, but a language barrier allowed him only to say, "All life is sacred."

He had been marching the southern route - there is also a northern route - with comrades since Alcatraz; all bound for Washington, D.C.

An unusual mix of people, the Long Walk 2 participants represented various cultures and had come from palaces as far as Japan, Finland and Australia. While each person was different, encompassing different experiences, they marched as one - chanting, singing, playing drums and waving flags - as they made their way toward Flagstaff along Route 180.

Shanawa Littleetow, who has also been marching since Alcatraz, said the 2008 Walk began Feb. 11with the purpose of bringing attention to the need to protect Mother Earth.

"We want to make people aware," Littleetow said. " We're trying to take people out of the clouds."

According to Littleetow there is nothing mystical about their message. "The earth is our home and like you keep your own home clean, we must keep this one [Earth] clean, too."

"Not only is it necessary to look for alternative energy, for example, but we also want things the like bones of our ancestors back," Littleetow said. "If I took the bones of a white man's body I'd be thrown in jail - we can't even get that respect."

The Longest Walk 2 entered Flagstaff early Friday morning, beginning the day with a Sunrise Prayer in Honor and Protection atop the Holy San Francisco Peaks. They then proceeded toward Flagstaff City Hall where a press conference was held.

Banks continued his speech by saying, "Thirty years ago we said we will raise our voice for the imprisoned, for those in stuck in poverty. Today the conditions are the same - nothing has changed."

Other speakers included Howard Shanker who represents the Save the Peaks Coalition in the current battle over snowmaking with reclaimed wastewater.

"I walked down the mountain this morning after the Sunrise Session and I saw how people rolled-up their windows and locked their doors. They were like 'Oh no, it's them'," Shanker said. "But, I say, it is not about them and us, it is about humanity."

Shanker also asked why the city would consider selling sewer water for snowmaking on a mountain held sacred by 40,000 people?

Before taking the podium, Executive Director of Natural resources of White Mountain Apache Tribe and direct descendent of Geronimo Phil Stago, respectfully walked around the crowd and acknowledged the elders before giving perhaps the most militant message of the day, the meaning of which was quite clear, "Some say the Indian Wars are over. I say they are just beginning! Let's do it! Let's do it!"

The Longest Walk 2 had been on the road 39 days when they entered Flagstaff, and have counted 980 miles thus far. With an expected 116 more days, the Long Walkers plan to arrive in Washington, D.C. on July 11.

The Walkers are traveling primarily through Indigenous land and impoverished areas documenting the atrocities they witness.

They are working on a manifesto they plan to deliver to Congress, demanding such atrocities be abolished.

Anyone is welcome to join the march, or walk any section of it. Everywhere they go they seem to attract a handful of people such as Stanley Melvin Perry, a Navajo man who joined the Walk in Flagstaff.

For Perry the significance of the march is respect for his ancestors.

"This is actually the third march," he said. "The first was when Kit Carson drove thousands of Navajos to Fort Sumter."

Ultimately, participants are participating for a variety of reasons; each however, will tell you it was a calling, not a choice.

If you wish to support the Longest Walk 2 you can do by contacting www.longestwalk.org.

There will also be forum on the Longest Walk 2 at Cline Auditorium Wednesday at 6:30 p.m., as well as a benefit concert Thursday, at 5 p.m. at the Orpheum. Tickets for the concert are $12 in advance or $15 at the door. For more information contact Taala Hoogan Infoshop.