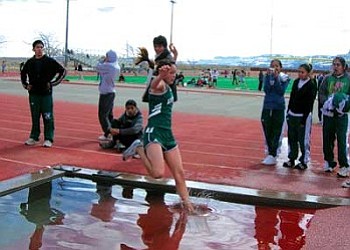 Sophomore Tiffany Nez leaps through the water pit on her way to victory in the 2,000-meter steeplechase. Nez later scored in the 800-meter run and ran a leg on Tuba City’s victorious 4x400-meter relay (Photo by Carl Perry/TCHS).

The Tuba City's girls and boys track and field teams both placed second at the Mustang Classic Track and Field Meet held at Monument Valley High School in Kayenta on March 8. The Lady Warriors scored 90 points to finish just half a point behind Chinle, who won with 90.5 points. Both teams have shown depth in all the events this season, a key ingredient to overall success.

Highlights from the Mustang Classic included sophomore Trisha Curley who won the shot put on her final toss and also placed in the discus throw. Curley is competing in track and field for the first time, yet has won the shot put in her first two meets of the season over tough competition.

Tuba City also earned wins from sophomore Tiffany Nez in the 2,000-meter steeplechase and sophomore Ryan Yazzie in the 800-meter run. Tuba City's talent and depth in the middle distances was on display when both the boys and girls teams ran to wins in both the 4x400-meter and 4x800-meter relays.