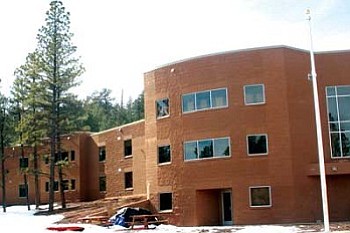 FLAGSTAFF - The beat of drums, rattle of traditional shakers and hum of chanting fill the room as 10 teens from the Navajo Nation and other tribes join in what's known as a drum circle.

It's an after-school activity at the Kinlani Bordertown Dormitory, a place where nearly 150 Native American youth live while they study at Flagstaff High School. As they pursue their education, the dorm's staff works to make sure the students continue developing the values important back home.

Dormitories located near reservations once were associated with assimilating Native American youths into the dominant (white) culture. Today, teens apply to live at Kinlani and dozens of other such dormitories and boarding schools around the country.

Freshman Taylor Chimoni, of mixed Apache ancestry, said that she appreciates the independence Kinlani offers along with an escape from problems that can make academic success difficult on reservations.

"I chose to come here because at home there are a lot of problems with drugs and alcohol," Chimoni said. "I decided to get away and go to a better place.

"So far it's harder than home, but I've been doing good in my classes," she said.

Jon Reyhner, a Northern Arizona University professor of bilingual multicultural education, said studying in such a setting is attractive to Native American youth for reasons ranging from family troubles to wanting a better education to sometimes hours-long treks over rutted roads to get to reservation schools.

Kinlani is nestled in state forest land, a 15-minute walk uphill from Flagstaff High School. Most of its residents are Navajo, but there also are members of the Hopi, Apache and Pima-Maricopa tribes.

In addition to their studies, students participate in a variety of cultural activities. A traditional powwow raises money for the seniors. Talking circles allow students to discuss personal issues. A Dancing Warriors program showcases modern versions of tribal dances. Some students take part in a rodeo club.

"We are linking a home environment to education," Begay said. "And coming from the reservation, for most students coming away from home, it's a whole different world out here dealing with city life. We want to make the best of both worlds to where they can survive in both worlds."

The dormitory, which completed a renovation from its original 1958 condition last February, is funded by the 21st Century Community Learning Center Grant Program administered by the Bureau of Indian Education through the Bureau of Indian Affairs. That program's goal: giving students access to better education and helping them feel comfortable in a different culture while still emphasizing Native American traditions.

In the past, such dorms and schools focused on integrating Native American youths into mainstream society. Students often were punished for speaking their languages or missing their parents and in many cases lived in regimented, military-like settings.

"American Indians went through a lot of devastations in history all in the name of assimilation, all in name of becoming part of the dominant society," Begay said. "There's a lot of stories about mistreatment, psychological abuse [and] physical abuse that took place."

Bobbie-Lynn Black, a Navajo senior whose passions include Spanish and photography, said she regards the rest of her senior class as brothers and sisters and the dormitory staff as family.

"We're a big dysfunctional family, but you get through it," Black said.

About 30 dorm workers provide counseling on personal or family issues, drive students to doctor's appointments, check students into the building after classes and watch over students in mandatory study hours every weekday from 7-9 p.m.

"We all take a part in raising the child, all take on the responsibility of teaching these kids as our own," said Verlinda Folgheraiter, a Kinlani academic adviser.

Chimoni said she appreciates the support because it helps her pursue her dream of becoming a doctor.

"Being here prepares you for life," she said.