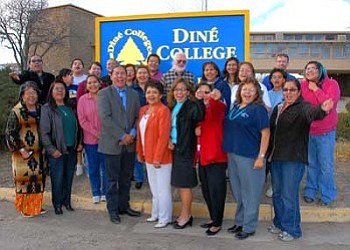 Administrators, faculty, staff, and students of the Diné College Shiprock Campus react March 5 to the news of Gov. Richardson’s approval of $5 million appropriations to build a new library at the Shiprock campus (Photo by Ed McCombs/Diné College).

SHIPROCK, N.M. - Diné College received approval from New Mexico Governor Bill Richardson of its $5 million request to the New Mexico State Legislature to build a new library at its Shiprock campus on March 5.

As part of Senate Bill 471, which included over $341 million for projects throughout New Mexico, Diné College's share of $5 million was one of the largest appropriations approved.

"We are extremely grateful for Governor Richardson, Speaker Lujan and House members, Senate members, and our great Senator John Pinto, and Representative Ray Begaye as champions of this important bill," said Diné College President Ferlin Clark. "A new library at our Shiprock campus is vital towards increasing educational opportunities for students within the northwest region of New Mexico."

The $5 million came from New Mexico's Severance Tax Bond Capital Outlay funds. An additional $7 million will be sought from the Navajo Nation Council as a matching fund to build the archival section of the library. The College received an initial grant from HUD in the amount of $600,000 to design and initiate preliminary activities of the project.

"A major component of the library holdings will include an archives section which will house invaluable treasures contained on old reel to reel tapes which we plan to develop, and duplicate for use by students, researchers, policy makers, and practitioners," said President Cark.

"We are proud of this accomplishment and we'll build on it for other areas of development."

Diné College plans to break ground for the 30,000-square-foot library by late spring. This award will support Phase II in the development of the Diné College's Shiprock South Campus where a new award-winning classroom and office facility was opened in 2005.

Some of the students, staff and faculty were so excited at the prospect of their new library, they wanted to get going immediately. Doris Bahee,  NDEL/DMST Coordinator, Math/Science/Technology at Shiprock campus said, "Let's get some shovels and start digging right now!"