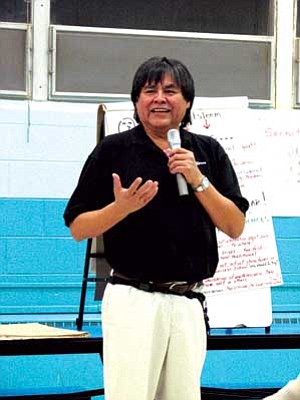 James Bilagody speaks to parent participants in Tonalea during the last of six parenting sessions held Jan. 27. Bilagody’s theme for the six-week long parenting course was “to prepare an individual for the inconsistencies of life through prevention” (Photo by Christopher Curley).

TONALEA - On Wednesday, Jan. 27, parents attended the last of six parenting sessions with presenter James Bilagody of Tuba City along with special surprise guest speaker James Junes, best known as half of the comedy duo "James and Ernie." Junes made a surprise visit to the session for parents and spoke of his personal experience on parenting.

Throughout the six-week course, each two-hour class emphasized the essential basics of parenting and being involved in a child's educational process. Bilagody covered many different perspectives of parenting, including personal experience through childhood, teenage parenting, and Diné and Western education. Bilagody delved on values and attitudes, effective communication, conflict management and resolution, self-esteem, peer pressure and our families and our strengths.

Bilagody referred to a seven-step value process, including the Maslow hierarchy of needs and Navajo philosophy as part of his presentation. At times there were intense moments of reality that struck vividly into the minds of the audience who remembered their personal experiences of boarding school days and growing up on the reservation. Bilagody's theme for the six-week course was "to prepare an individual for the inconsistencies of life through prevention."

Junes was greeted by a room full of parents that welcomed him enthusiastically and listened to the uncanny eloquence of a man better known for his comedy. Junes spoke of his strong family values and noted that his mom is his role model - a model of strength and values that is a two-way street. Junes passionately reminisced about growing up and thinking about how one could dream of being a superhero and make anything happen.

Junes stated, "Be who you are. You are unique. Don't try being someone you are not and remember that the original is always better than the copy, you have to believe that about yourself."

While speaking, Junes' comedy would surface and parents would laugh and draw in the message of retaining a strong family. Junes compared learning to play the flute to some of the lessons of life: at first it may seem impossible, but with practice it becomes easier. Junes said a close friend had given him a flute as a gift and could not begin to fathom how it worked.

Through his infant stages of learning he said, "There were times I felt like I could not do it, but through practice I have learned to play."

Junes played the flute along with Bilagody on the guitar as the soft tones captivated parents.

Junes completed his speech with, "Being successful takes many failures; the character of a person is identified by not how they fall but how they rise. You can do anything you can set your mind to."

Bilagody's Towering House Entertainment has received much positive feedback on his parenting sessions throughout the course and many interested parties have contacted Bilagody to do similar presentations. Bilagody, a musician, comedian, parent, and class provider, has mixed his cultural background into a world of prevention, of empowering, assisting and redirecting parents to grasp ideas that can help reinvigorate a system of growing healthy families.