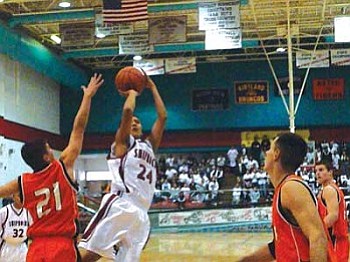 Christopher “CJ” Begay (24) of Shiprock soars up for a bucket as Artesia’s Adrian Hall (21) defends. Despite a rallying effort, the Chieftains lost with a score of 57-52 (Photo by Anton Wero/NHO).

SHIPROCK, N.M. - The road to the University of New Mexico Pit ended at the Shiprock Pit when the No. 11 seeded Shiprock Chieftains (16-13) hosted the No. 6 ranked Artesia Bulldogs (20-9), during an elimination round of the New Mexico State high school championships. Despite a rallying effort, the Chieftains lost with a final score of 57 -52.

Riding a six game winning streak, the Chieftains were ready to take on the Bulldogs.

"We met them before. They are well-coached," said Cliff Johns, Shiprock head coach. "I told the guys, 'Be ready for these guys, they can run the floor.'"

The Bulldogs were victorious in their first head-to-head meeting during the New Mexico Highlands Holiday tournament, winning with a score of 81-62.

"We like to pressure the ball defensively. We like to run offensively and control the tempo of the game," said Artesia head coach Ike Montoya in a pre-game conference. "We run an up-tempo high-pace offense and we like playing to a full house. The guys are up for this."

The Bulldogs had to overcome several obstacles. First, they had to travel 463 miles to northwest New Mexico. As if that wasn't enough, 4,628 loyal Chieftain fans were on hand to ensure the road to the Pit would be arduous for the Bulldogs.

The Bulldogs' senior team scoring leader Derek Montoya (18 points per game) opened the scoring for the visitors as the Chieftains countered with senior point guard Antonio Paramo, who penetrated the middle and was fouled and connected on the front end of two free throws. On the next possession, senior Christopher "CJ" Begay backed his way into the paint for a four-foot jumper and senior Devin Bidtah banked a score off the window after a missed free throw by the Bulldogs. With the sold out crowd in a frenzy, the Chieftains held onto a 6-2 lead.

With three minutes left in the quarter, Artesia's Adrian Hall drove the paint for two and one, but failed to convert. From there, the Bulldogs took a 10-8 lead, a lead they would not relinquish. The Bulldogs coasted to a 21-14 opening period lead behind Hall's five points during a 9-2 run, capped off by a lay-in at the buzzer by Montoya. Bidtah, however, kept the Chieftains within striking distant with his second three-ball of the quarter aided by a three-point play by senior Harold Smith, which gave the crowd some anticipation of a comeback. But the Chieftains fell behind by seven points midway through the quarter.

Bidtah quickly continued where he left off by opening the second quarter with a score for the Chieftains as he connected from beyond the arc twice to a basket by the Bulldogs' Caylan Hutson. From there, the both teams went on a scoring drought as they cumulatively missed nine scoring opportunities over the next three minutes. Finally, the Bulldogs outscored the Chieftains 10-6 to end the half leading 33-26.

After the break, the Bulldogs came out with a new strategy, much to the dismay of the crowd as they went to a spread offense.

"Once we got the lead, we wanted to get them (Chieftains) out of their zone and spread them and try to get some lay-ups opportunities," explained Coach Montoya.

"That's what good solid teams do," Coach Johns responded. "They know how to take care of the basketball, control the glass and the game."

By spreading the floor, taking control of the tempo of the game and moving the ball around the perimeter, the Bulldogs were able in penetrate the weak side for a lay-in by Montoya, who scored three times in the paint. Tyson Billy, Smith, Begay and Bidtah were able to score off forced turnovers, steals and breakaway lay-ups, to keep pace, but still trailed as the third period ended with a score of 46 to 38 in favor of the Bulldogs.

Shiprock battled back in the final quarter, perhaps seeing their season slowly slipping away. The Chieftains - who all season long had that "never give up" attitude, despite going through coaching changes and coming back from behind to top the district 1 AAAA - put together one last gut-wrenching effort to outscore Artesia and cut their lead to 51-47.

The sixth man wasn't about to be denied. As Montoya drove the lane, Bidtah stepped in and took charge, eventually sending Montoya to the showers with just 2:30 left in the final quarter. Sensing a momentum change, the crowd exploded.

The noise was deafening when the Chieftains' Mychael Garnenez hit a three-ball with just over two minutes left in the season for one of the teams. It got louder and louder as Paramo drove the paint for the bucket to get the Chieftains within one point with a score of 53-52.

Within 30 seconds Artesia's Brian Madrid stretched the lead back to three points with a bucket. Then the Chieftains' Smith was fouled in the paint after several errant three-ball attempts. You could hear a pin drop in the Pit as Smith went to the charity stripe for two free throws but couldn't convert.

Artesia then finished off the Chieftains' season with two trips to the charity line and connecting on two of three attempts for a final game-winning score of 57-52 on the road.

"Shiprock just played a great game," said Coach Montoya. "I give them a lot of credit. They stepped it up and played well."

The Bulldogs were led offensively by Adrian Hall and Derek Montoya with 14 points and 10 points, respectively.

"Artesia is a solid squad. We just got out hustled [in the end.] They deserve the win," Coach Johns concluded.

The Chieftains, who will graduate eight seniors, were led in scoring by Devin Bidtah with 17 points, Christopher "CJ" Begay and Harold Smith Jr added nine points each and Antonio Paramo contributed eight points.