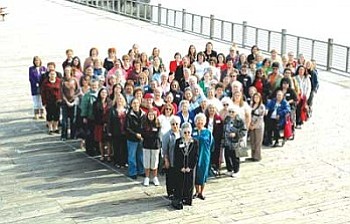 Members of the Heart of the American Indian Women’s Network gather every year to provide a forum for debate, a platform to discuss their views, issues and opportunities to mentor and network. This group photo was taken last year when the Coquille Indian Tribe of Oregon hosted the April 2007 gathering. More than 150 members attended last year’s event (Photo courtesy of the Coquille Indian Tribe of Oregon).

Conference events begin with registration at 7:30 a.m. Monday, April 7 with an introduction by the network's chairperson, Mevelyn Kirkpatrick, a member of the Chickasaw Nation.

President Enos will welcome the group, who gather annually to continue the vision of its founder the late Dr. Bette L. Haskins, a Cherokee educational leader. Haskins once worked as an Indian Education Specialist with the Bureau of Indian Affairs in Washington, D.C. and was a Director of the American Indian program at Harvard University.

It was when Haskins worked at Harvard University in 1988 that she founded the network. Haskins, a native of Enid, Okla. wanted an organization that would give American Indian women a forum for debate, a platform to discuss their views, issues and an opportunity to mentor and network.

"We have 1.3 million Indian women today, 1.2 million of them live in despair, Haskins once said as she addressed the group in 1999. "My heart goes out to you, ladies. The challenge is yours because you have the potential to touch other Indian women's lives."

Doretta Sellers, this year's conference organizer and longtime network member said, "Each year female tribal leaders gather to discuss issues and problems their tribes are facing, many times we have found that tribes have the same obstacles to overcome and it is interesting and informative to learn of the various ways each tribe handles a situation."

She said that every other year, the network conference organizers try to alternate locations, holding the conference one year on the East Coast and the next on the West Coast.

"Our last leadership conference held in Arizona was in 1993," Sellers said. "We settled on this year's conference by inquiring with one of our longtime Navajo members of a site she felt would be sufficient for the 2008 Leadership Conference and she highly recommended the Salt River Indian Community."

Sellers added that network members are excited that next year will mark the 20th anniversary of the network's creation, and they plan to commemorate it a special way.

"We plan to hold our conference at the site of its origin, Harvard University," Sellers said.

Various American Indian tribes have hosted prior conferences such as the Chickasaw Nation of Oklahoma; Cow Creek Band of Umpqua Indians of Oregon; Coquille Indian Tribe of Oregon; the Navajo Nation; Oneida Nation of New York; Oneida Nation of Wisconsin and the Powhatan Nation in New Jersey.

There are approximately 110 members across the country, and American Indian women who are heads of state or serving on tribal council are automatic members.

The network members and conference organizers welcome all women tribal leaders and those interested in leadership positions within their tribe, state or national government to attend the conference.