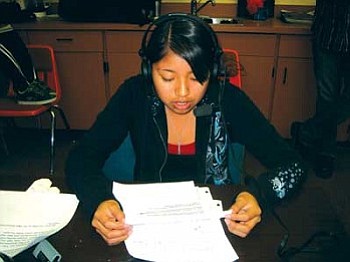 Joelle Mansfield goes on the air as the new environmental editor for the Hopi High Teen Show, the only live remote Native American teen talk show in the nation. Mansfield said she has a passion for the environment because nature is pretty and pollution is ugly (Photo by Stan Bindell/NHO).

The Hopi High Teen Show is the only live remote Native American teen talk show in the nation. It airs from 2-2:30 p.m. each Thursday on KUYI, the Hopi community radio station, 88.1 on the FM dial.

Mansfield said she has a passion for the environment because nature is pretty and pollution is ugly.

"Pollution is bad for everybody and it's getting worse," she said. "I'm [very] concerned about global warming and sea pollution including oil spills."

Mansfield, a 15-year-old sophomore, said she would like to see cars run on recycled trash.

"That would be cool," she said.

Mansfield's first report last week was about a proposal for Arizona Public Service to build the largest solar plant in the country in Arizona.

"My mom and I want to take in our recyclables, but we don't know where to take it," she said.

Mansfield said it was cool to be named environmental editor because she gets to read more about the environment and then put it into her own words.

Mansfield said reporting environmental news on the radio on the Hopi Reservation is especially important because many residents don't have television.

"Maybe people will care more about the environment," she said.

Other students in the radio class will be rotated to give the weekly environmental report, but Mansfield will overlook the final report.

Mansfield will be one of seven students from the Hopi High Radio Class to attend the National Federation of Community Broadcasters Conference in Atlanta, Ga., March 26-29. She said she is looking forward to the radio conference because she will be going someplace new, meeting radio professionals and learning how they do their work.

Radio students Paul Quamahongnewa and Povi Lomayaoma will be attending a special section at the conference about the First Amendment. Only two students from nine schools were selected for this section.

Mansfield, who was recently nominated for National Honor Society, runs for the Hopi High cross country and track teams.