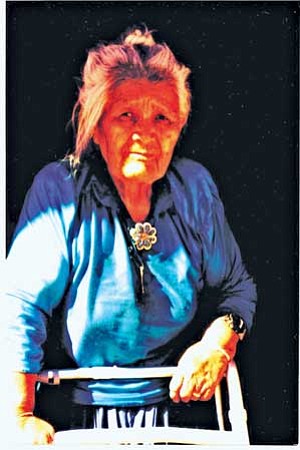 A Navajo elder. The Centers for Disease Control (CDC) reports that over 15 percent of Native Americans age 20 and older have diabetes (Courtesy photo)

NAVAJO NATION - March is National Nutrition Month and March 25 is National Diabetes Awareness Day. Did you know that diabetes is the sixth leading cause of death in the U.S.? Diabetes, exercise and nutrition are linked. Heart disease is also linked to diabetes. That's why many tribal health programs are running special events in March to promote good nutrition and health screenings for diabetes.

Diabetes dwells among us, but it is more pressing for American Indians since they have higher incidences of diabetes and are more at risk than any other ethnic group in the United States. The number with pre-diabetes is growing at alarming rates.

The Centers for Disease Control confirms these estimates. CDC's latest estimate is that 15.1 percent of the entire American Indian population aged 20 and older has diabetes. The highest rate is in Arizona at 27.6 percent.

Type II diabetes is the main culprit. The good news is that Type II diabetes can be controlled. Navajo diabetes programs and senior centers know that early screening, proper nutrition, and even light exercise can make a difference.

Making small changes in your lifestyle can make a world of difference. To help do this, a number of Navajo chapters are running health fairs, special health screenings, and diabetes or nutrition classes in March. Events are scheduled to take place throughout March at the Alamo Navajo Health Center, Bluff Senior Center, the Gallup Special Diabetes Project in New Mexico, the Aneth Senior Center in Utah, and the Indian Wells, Nazlini, and Teesto Senior Centers in Arizona. The Public Health nurse in Kayenta is also hosting a community event in Chilchinbito on March 13.