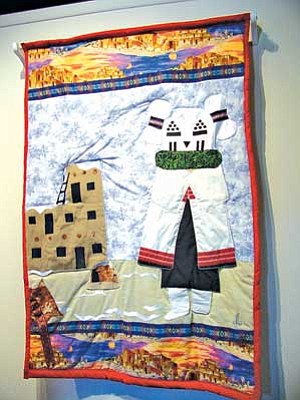 Somana Yaiva’s Snow Maiden quilt remains on display at the Smoki Museum. Yaiva’s quilt was chosen to represent the show and is featured on banners and programs (Photo by S.J. Wilson/NHO).

PRESCOTT - Noted author Carolyn O'Bagy Davis and Prescott's Smoki Museum of Indian Art and Culture came together to present a collection of Hopi quilts. Davis is the author of "Hopi Quilting: Stitched Traditions from an Ancient Community" and "Hopi Summer."

Somana Yaiva of Hotevilla was fortunate not only to be a part of the exhibit, but one of her quilts was chosen to represent the exhibit.

"I was very excited to have my image on the banners and post cards," she said.

Yaiva began her own love of quilting in 2000. Up to that point she had been primarily a painter; however, as a new mother she recognized the toxicity issues and probable effects on her young daughter.

"My husband bought me an old sewing machine and I consulted my mother-in-law, Sadie Francher, who asked me, 'Can you sew a straight line?'" Yaiva said. "I got my art sense from my mother and my Godmother, Verma Nequatewa. They are my creative inspirations. My mom has guided me in a professional sense."

She credits the Odegaard's sewing and fabric company in Flagstaff for also helping her.

"I've been really blessed," she explained. "One [fabric] in particular was just being downloaded from the truck ... It wasn't ready for sale, but they ... sold it to me at an excellent price."

Though many quilters today have replaced the tradition of using scraps from family clothing in the past and are no longer able to recount family stories from the patches, Yaiva discovered a new history in one of her quilts.

"I used Bluebird flour sacks in one of my quilts, and ... realized that the design on the bags changed with time," Yaiva pointed out.

Quilting, she said, is her ode to the Hopi quilters of the past, who created quilts as a utilitarian expression.

Yaiva laughed as she described the machine that the family saved for seven years to purchase.

"It has no feet, and the thread spool is held up by a pencil," she said. "The light doesn't work. I use it to work on my quilts. I'm sentimental about it."

Yaiva credited the museum for its efforts to rise from its beginning as the repository of Smoki People regalia and artifact collections into a modern, respectful collection.

"The museum has shifted from a stance of preservation of culture for Native peoples," Yaiva said. "These efforts represent a great stride to rebuilding relationships between the [museum] and the Hopi People. I appreciate that all of the items in the quilting exhibit were created by Hopi people, and that each artist was given full credit for their work."

She also offered her respect and appreciation to museum curator Adam Mikos.

Yaiva said that she was disappointed that O'Bagy, nor the other Hopi artists represented, were able to attend the opening. However, she was able to meet Yavapai and non-Indian quilters who shared techniques and stitches.

It is somewhat ironic that Yaiva accepted the invitation to show her quilts at the Smoki Museum as her family was directly involved with efforts resulting in a change in mission and vision for the repository.

The Smoki Museum was established by a group known as the Smoki People. They formed in 1921 in an effort to preserve the city's Frontier Days Rodeo, which had fallen on hard times financially. The Smoki People offered several acts, including their version of the Hopi Snake Dance.

The effort was successful and spurred the publication of Sharlot Hall's 16-page fictional history of the Smoki People by the Prescott Courier in 1922.

President Calvin Coolidge was photographed in 1924 as he "became" a member ("i.e. Hopi" as noted on photo cutlines) commemorating the granting of full citizenship rights to Native Americans.

Though financial gain was clearly one goal of the Smoki People, the group also viewed their activities as a means to preserve Native American culture. At this time in history, the federal government was actively involved in the assimilation of Native people, forcefully placing Native American children into boarding schools and stripping them of their culture, lifestyles, language and clothing.

It is therefore a sad irony that non-Indian people were actively painting their bodies and performing their interpretations of those same ceremonies for a price, despite good intentions.

The museum was built as a repository for the Smoki People's collections of paraphernalia and artifacts, which had been housed in the basement of the Palace Hotel. The first building was completed in April of 1931. An additional structure was built in 1934. The museum opened on May 29, 1935, under Smoki "Chief" Ray Young.

The Smoki People, now part of Arizona history, are controversial even among some Prescott residents though Yaiva noted that the organization was like a family to many others.

Yaiva's mother, Rosanda Suetopka-Thayer, who served as Special Projects Assistant to the Chairman of the Hopi Tribe, was eventually called on to lead a protest effort of the last performance in 1990. The Smoki People decided to respect the requests of the Hopi Tribe, and the 1990 ceremonials were the last.

"At that time, all those old Smoki People transferred their collections and history to a new corporation and made it the Smoki Museum," said Mikos. "I've been here for two years now, and I can tell you there are no Smoki People involved here anymore. For the last five or six years, the board has made direct efforts to break from its history and work with tribes and living history."

As part of this effort, the Smoki Museum has added a Native American Advisory Council, which Suetopka-Thayer sits on along with Kuwanwisiwma, Donald Nelson (Hopi), artist Ramson Lomatewama (Hopi), Tony Eriacho Jr. (Zuni) and others. Mikos also noted that the museum hired Ryan Huna Smith (Chemehuevi/Navajo) as director.