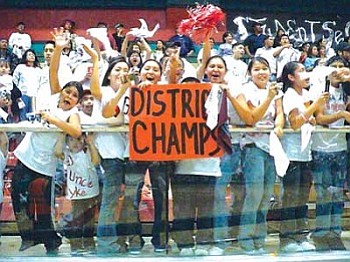 Shiprock Chieftain fans cheer for their winning team. The Chieftains will go to the New Mexico state playoffs to face Artesia (Photo by Anton Wero/NHO).

SHIPROCK, N.M. - Just when you though it was all over, guess what? Same game, same fans...just a different state. About 4,500 fans amassed at the Shiprock "Pit" for this much-anticipated New Mexico district tournament. Due to the large turnout, many fans were turned away an hour before the 7 p.m. start. Those who were fortunate enough to get in witnessed school history as the Shiprock Chieftains won their first-ever New Mexico District 1 AAAA title over the Piedra Vista Panthers of Farmington with a final score of 55-54.

The Chieftains will host the Artesia Bulldogs Saturday, March 8 in the New Mexico 4A State Basketball Championships first round game.

It's important for any team to peak as the season winds down, and the Chieftains, under new head coach Cliff Johns, did just that. Since Johns took over as head coach, the Chieftains have won seven games, losing only twice.

"We made a run since I took over," Coach Johns commented. "We changed some things [and are] playing some of that Arizona style, [Winslow] Bulldogs style - that's what you see here."

When asked about the changes he made, coach Johns said, "When I came in here, we wanted to make some changes [to include] things that I was raised with and grew up with. That's just what I showed my guys. [I told them,] 'This is a way you can win, it's a way you can get somewhere.'"

Before coming to Shiprock, Johns played ball for the Winslow Bulldogs during the Rich Brett era before attending the University of Arizona, where he played NCAA Division I basketball for prominent head coach Lute Olson, which included a trip to the Final Four during a pair of NCAA tournaments.

"Change is good. He made some changes, [adding] little things that made a difference," said senior starting guard Christopher "CJ" Begay. Begay became an instant hero after he picked the pocket of the Panthers during an inbound play with 28 seconds left in the fourth quarter and hit the game-winning bucket." He exclaimed, "[I am] happy, I am r-e-a-l-l-y happy [that] we're going to state."

The No. 1 seeded Chieftains advanced to the district championship game with a 62-44 win over the Kirtland Central Broncos in the semi-finals.

Meeting for the fourth time this season, the Chieftains and the Panthers squared up once again for a shot at the New Mexico State championships. Piedra Vista got off to a quick 6-0 start behind the scoring of Panthers' stars Kyler Garrison and Cody Colbath.

"We adjusted our zone defense. We knew that Piedra Vista has a good inside game and they have a good outside [game as well,]" said Coach Johns. "We were trying to get a feel of that early on."

Devin Bidtah and Harold Smith soon answered to the delight of the sold-out crowd, cutting the lead to two.

The Panthers' Michael Suarez hit a pair of three balls to offset Begay's scoring efforts to extend their lead to 12-6. With their adrenaline levels in check, both teams settled down, trading baskets as the quarter ended with the Panthers taking a five-point advantage, 18-13.

The crowd got their money's worth in the second quarter when they were treated to the "Arizona style play," mentioned by Johns, which included a fast-paced game. "That's our style - an up tempo style with full court pressure. From there, we get into our transition offense," he said.

That style of play included the all too familiar three ball. It rained three balls in the Pit as the Panthers' Suarez had two and Jeff VandenBroeck added one while the Chieftains' Mychal Garnenez hit one from beyond the arc and Tyson Billy added two of his own. The Chieftains were able to outscore the Panthers, but still trailed as the half ended with Shiprock down by four points, 34-30.

In the locker room, Coach Johns said, "I told them, 'Guys we are not out of it. Its going to come down to the little things, don't give up, believe in yourself, lets make a run.'"

When the third period began, the Chieftains scored on forced turnovers one after another as the noise reached deafening portions. The Chieftains were able to take control of the game and take the lead for good when senior point guard Antonio Paramo found Begay on the baseline, Begay scored on a driving lay-in off the window with 4:40 left in the third quarter. Shiprock stretched the lead to nine points, 46-37, after their second run, outscoring Piedra Vista 16-3.

"My guys clicked and they came around. They became more active [and] were communicating on offense and defense. They picked up on that and ran with it," said Johns.

Not to be denied, the Panthers made a run in the final frame, relying on their strength - the inside game - and outscoring the Chieftains, tying the game at 53.

After Begay hit the game winner, the Panthers went to the charity stripe twice and converted on only one of three free throws which brought the score to 55-54. The Chieftains then spread the floor and began to milk the clock.

"During the timeout, I told the guys, 'We knew all season long, Garrison always goes up the middle,'" Johns said.

As Garrison penetrated the lane, he was tagged with an offensive foul.

After another missed free throw, the Panthers called their last time out with five seconds left on the clock to set up the final play of the game.

"We gave them a different look, denying them the middle," said Johns.

As a result, Piedra Vista had no place to go and were forced to commit a costly game-ending turnover, which kept the final score at 55-54.

"Tough loss, tough loss. I thought our kids played real well," said Rick Hoerner, Piedra Vista head coach. "Shiprock played a great game. We made a great run to get back in the game [and] did the best we could." Kyler Garrison had a game high 16 points for the Panthers.

"Feels good. It's hard to explain it, [but] it feels good, I just want to yell," commented Devin Bidtah after the game.

Bidtah led the Chieftains in scoring with 13 points, followed by Christopher Begay with 10 points while Antonio Paramo and Tyson Billy contributed eight points each.