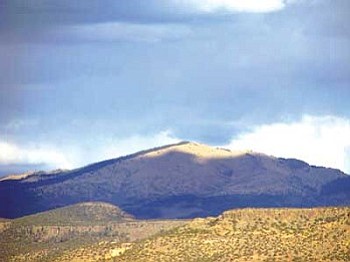 Mount Taylor, located near Grants, N.M., will not be mined for uranium soon.

ALBUQUERQUE, N.M. - The sacred Mount Taylor, located near the community of Grants in north central New Mexico, has won a temporary reprieve from exploratory uranium mining. Tribal leaders, pueblos and the Sierra Club praised the decision by the New Mexico State Cultural Properties Review Committee, which will allow the state to gather input from affected tribal groups. This decision will allow the tribes and the Historic Preservation Division to carefully evaluate any applications for mining permits.

"All we are asking is to have a fair process to determine the traditional cultural properties on Mount Taylor," he added.

Mount Taylor, just north of Grants, is an 11,300-foot peak and a sacred cultural site for the tribes and groups involved. The greatest threats to Mount Taylor are permits for exploratory mining and other activities issued by the New Mexico Mining and Minerals Division. The state has streamlined the mining permit process while ignoring Gov. Bill Richardson's Executive Order requiring statewide tribal consultation for the protection of sacred places.

"The committee action means pueblos and tribes can't be ignored when there are imminent threats to a sacred mountain," said Robert Tohe with the Sierra Club's Environmental Justice Program, which praised the emergency nomination.

The Pueblos of Acoma, Laguna, Zuni, Hopi and the Navajo Tribe had submitted an application for registration with the New Mexico State Register of Cultural Properties.

"We know firsthand the hardships suffered from over 50 years of dealing with the impact of uranium mining and the toll it has taken on our health and environment by living in proximity to the Jackpile Uranium Mine," said Laguna Pueblo Gov. John Antonio Sr.

New mining is opposed by pueblos and tribes, as planned, because of a failure by the state to investigate and perform environmental analysis on underground drinking water sources, groundwater withdrawals that may affect regional hydrologic balance and impacts from drilling of exploratory wells throughout the watersheds of Mount Taylor.

The pueblos and tribes will have one year to complete a formal application to the state.