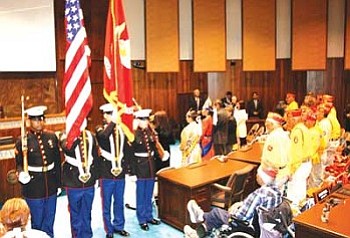 Navajo Nation council delegates attended the public unveiling of the Navajo Code Talker monument Feb. 28 at the Arizona state capitol. Pictured are members of the Six Bulk Fuel Marines of Phoenix posting the colors before the event as Navajo Code Talkers look on (Photo by Joshua Lavar Butler/NN-OS).

In a welcome speech, former Navajo Nation Chairman Peter MacDonald Sr. stated, "It was a long time coming," as he looked upon the bronze statue situated in front of the capitol in downtown Phoenix.

The bronze statue features a kneeling Navajo Code Talker speaking into his radio, transmitting messages in the Navajo language - messages that the enemy was never able to decipher.

According to the Web site www.navajocodetalkers.org, more than 400 Navajo warriors were trained to use the Navajo language to pass messages via radio during World War II.

From 1942 to 1945, U.S. Marines who were from the Navajo Nation used an oral code in a campaign against the Japanese troops. The Code Talkers were never allowed to disclose their contribution to the winning of the war in the Pacific theater and most, if not all the families say they never knew about this until their later years when it was finally made public.

As the celebration and remembrance of those who served lasted late into the afternoon, some recalled those who didn't make it back as they gathered around the Navajo Code Talker Monument.

"As they were blessing the monument," MacDonald said during his speech, "I was thinking of two friends of mine from Teec Nos Pos who never made it back. I thought of all those who have passed on and how they did not get to see this monument. I was overcome with emotion thinking about Carl Gorman, Merril Sandoval, James Nakai, and the many others. Many sacrifices were made so that we could be here today."

Former Arizona State Representative Sylvia Laugher, founder of the Navajo Code Talker Memorial Foundation, said this day brought memories of all the hard work that many people did and how they all came together to honor those who served.

Laughter recalled how back in 2003, the formal announcement was made in Window Rock to have the two bronze statues made to honor the Code Talkers.

She said then that it was going to "take everyone's effort to work together to get this done."

Laughter said she is grateful to many people who helped, including thousands of Navajo children who donated pennies to help pay for the statues.

Laughter added that in 2004, Navajo Nation Speaker Lawrence T. Morgan (Iyanbito/Pinedale), along with the 21st Navajo Nation Council, worked together to allocate the monies for these statues.

She stated that many state legislators from Arizona and New Mexico were instrumental in helping the Navajo Code Talker Memorial Foundation become a successful project. One of those legislators in attendance was former Navajo Nation President and Arizona State Sen. Albert Hale (D-District 2).

"I think this is a very special occasion and shows how many people came together in a commonality of a great cause. I hope this serves as a reminder to the human race that we need to be tolerant and respect all cultures and other people's languages," said Hale.

For family members it was a time to reflect.

Brian Akee, 27, originally from area of Tuba City and Cameron said, "To see my grandpa, (Navajo Code Talker Dan Akee) get honored was really special. Now to see everyone come together for this event is even more special."

Akee brought his two children - Ariana Skyler Akee, 4, and Matthew O'Ryan Akee, 2, who were playing at his feet to see the Code Talker Monument - so they could see they are a part of legacy that helped secure freedom for America.

Yet, Akee said that he never really spoke about it until he was older.

"We mainly just saw photographs and that was it," he said.

Akee said it wasn't until a teacher came to his classroom during his eighth grade year and he realized his grandfather was part of something really historic.

"My teacher's father fought in World War II and in Iwo Jima. He said to me, 'Were it not for grandpa and the other code takers, we wouldn't be here today. They saved a lot of lives.'"

Akee smiled as he was told by a relative that his nali is standing at the monument while Navajo medicine man Norris Nez, of Coalmine Canyon blessed the monument.

Throughout the day, people from all walks of life, ethnicities, and cultures from around the world visited the monument.

For Doris Marlowe, 86, of Phoenix, who is of German descent, she had a special reason for being at the dedication ceremony. The vivacious elder served in the U.S. Navy during WWII as a radio operator.

I know what they (Navajo Code Talkers) went through," she said in a serious tone. "You never spoke about it. When you went through the gate to leave at night, you forgot what your learned."

Marlowe said she knew for over 56 years about the Code Talkers but never spoke of them.

"It's a holiday for our nation and I think it should be observed for what they did. All types of people from many faiths, races, ethnicities and cultures are here today to honor them and that's wonderful. They are the ones who talked with the voice of the wind."

Adding to the celebratory occasion was the Twenty-Nine Palms United States Marine Corps band from California.

As they played the "National Anthem," those in attendance removed their hats and held their hand over their hearts. After a 21-gun salute in remembrance of the Navajo Code Talkers, two bugle players from Six Bulk Fuel of Phoenix played "Taps" as many wiped tears from their eyes.

While the crowd was moved by the spirit of the occasion, several council delegates who made the trip to Phoenix offered their thoughts.

"It's an honor, as a daughter of a Code Talker and Navajo ... The ceremony was moving and powerful," she said.

When asked what this day meant to her personally, knowing that so many people showed up from different parts of the country, MacDonald-Lone Tree paused briefly before she answered as she looked out to the crowd that had about a dozen Navajo Code Talkers among the hundreds who were in attendance.

"It means..." She paused as she became emotional and smiled, wiping away her tears, "It means that they are just as proud of our Navajo Nation Code Talkers as we are."

Navajo Nation Vice President Ben Shelly spoke to the audience, stating in Navajo that a monument needs to be placed in Santa Fe, N.M. next.

"The voices of the people must be heard on that endeavor," he said. "You are the ones who need to make it happen."

Former Miss Navajo Nation Radmilla Cody then took to the microphone. She sang several songs while co-host Leila Help-Tulley, legislative staff assistant from the Office of the Speaker, introduced dignitaries and various people who were instrumental in the Navajo Code Talker monument.

For more information about this event, contact Joshua Lavar Butler with the Office of the Speaker at (928) 871-7160.