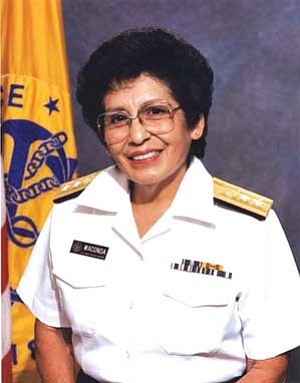 The award is given in observation of National Women's History Month. Over the years, this public event has included pueblo women artists, activists, tribal leaders and educators who have made a difference in their communities.

Waconda is a former Assistant U.S. Surgeon General and the first American Indian woman to achieve the rank of Rear Admiral in the commissioned corps of the United States Public Health Service.

Her distinguished career in health care spans 42 years, starting with clinical nursing at Intermountain School in Brigham City, Utah in 1955. Through the 1960s and 1970s, she served in other areas such as pediatric and public health nursing in Albuquerque and throughout several pueblos.

From 1987 to 1997, Waconda served as Director for the Albuquerque Area Indian Health Service where she managed just over 1,200 medical personnel including physicians, nurses, dentists, pharmacists and nutritionists as well as administrative personnel and health educators.

She managed a $98 million annualized budget to provide comprehensive health care services to more than 75,000 Native Americans from 27 tribes residing in New Mexico, Colorado and Texas through a multi-service structure including five hospitals, 10 health centers and 10 health stations.

Waconda said that her first love was always patient care and not administration. "I hated having to get permission for doing everything that needed to be done," she said, "But I realized that in administration, I was able to benefit many people in the long run and was happy knowing that I was affecting change."

Waconda is credited as a role model for other women she has worked alongside or mentored throughout her career.

Zuni Pueblo councilwoman Charlotte Bradley is just one of them. She first encountered Waconda in 1990 while the two were working on health issues of the Zuni.

"She's been an advocate for Native Americans all of her life and I admire her very much and consider her one of my role models. I'm delighted that she's being honored," Bradley said.

According to Charlotte Little (San Felipe) of Little and Associates, a government and public affairs firm, Waconda was a mentor to her and other Indian women working their way through the ranks of the Indian Health Service.

Little said of Waconda, "She is intelligent, even-tempered, a good listener and she was like your mom- you didn't mess around with her. She took care of a lot of Indian people with compassion."