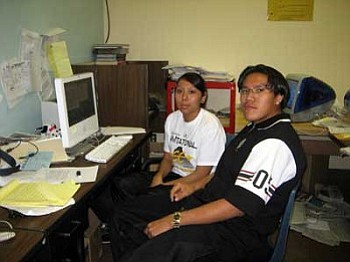 POLACCA - Two radio students at Hopi High School have been awarded scholarships to attend a prestigious national radio conference where they will learn about the First Amendment.

The project is in conjunction with the 33rd annual NFCB conference at the Sheraton Atlanta.

NFCB, in association with the Georgia First Amendment Foundation and the Radio and Television News Directors Foundation, will train the radio students in radio journalism and the First Amendment.

The project is funded by the McCormick Tribune Foundation.

Conference literature states that the students selected for this project will participate in two days of multilayered, interactive, experiential learning activities designed to enhance their journalism skills, offer them opportunities to work with other students from different sections of the country and equip them as First Amendment warriors.

Conference literature states that the First Amendment is the cornerstone of democracy and is under attack from many corners of government and commercial media. It says that maintaining the right to speak, write, broadcast and dissent is an ongoing battle. The conference seeks to inspire participants to take on the defense of the First Amendment as their freedom to speak and broadcast depends on it.

The project also plans to arm the radio journalism students with a basic knowledge of journalistic principles and ethics as well as a working knowledge of reporting, editing and mixing equipment.

The project seeks to train students so they can practice journalism in their communities and create work to revitalize the practice and protection of the First Amendment.

The students will consider questions such as limitations on students' rights to free expression, self-censorship and "hate" speech.

After a training period, the radio student journalists will decide what story to cover and how to cover it. The story will be on a topic that can be covered using sources in Atlanta. By the end of the seminar, each team will have produced a story.

The participating students will be required to produce an additional news story or feature before the end of the school year. Students can work as a team or by themselves. The stories will be made available to the entire public radio system through Public Radio Exchange (PRX).

Quamahongnewa and Lomayaoma are both looking forward to the First Amendment project.

Lomayaoma, a senior, said the scholarship will give her a chance to learn about the First Amendment.

Quamahongnewa and Lomayaoma said they are looking forward to working with other radio students from throughout the country.

Quamahongnewa said he likes working with other radio students because they can help him in areas he has trouble with.

"Plus, working with other radio students helps me know what they are good at and I will help them in anyway I can" he said.

Lomayaoma said that since this is her first year in radio class that she could use the help of other students.

Quamahongnewa said radio is important to him because it is his way of knowing what's going on in the world and listening to music when he's not listening to his ipod.

Lomayaoma plans to major in print journalism in college, but wants to use radio as a second career.

"I like to write and I just thought that journalism would be my career. I want to work in a big teen magazine," she said.

Quamahongnewa said journalism is important to him because he gets to know what journalists do and it prepares him to ask the right questions during interviews.

Quamahongnewa wants to become a sports journalist and sports broadcaster.

Lomayaoma said when she returns she will use what she learns to talk about the First Amendment.

Five other students from Hopi High School will attend other sections of the NFCB Conference thanks to funding from The Hopi Foundation, KTNN and other individual contributors.