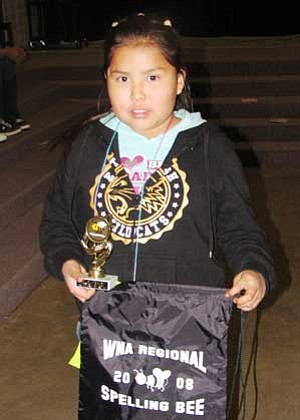 George is the daughter of Mildred Huskie and Guy George. She won by spelling the word, "benefactor".

George also managed to place third overall in the entire contest, competing against the top two spellers from fourth through eighth grades in the final competition.

Of these students, Tso took the top two from each grade level to the Western Navajo Area Regional Spelling Bee at Greyhills in February. Kaley Secody placed second overall correctly spelling words like, muumuu, persimmon and caribou. Words for each grade level were difficult, including such words as ventriloquist, damask, commiserate and basilica. Secody also placed second for the fourth grade level.

Senneca Johnson placed second for at the fifth grade level.

The WNA Spelling Bee for this year was organized by Fredia Maloney, Department of Youth Spelling Bee Director.

The next spelling bee competition for these local winners will be held at the Navajo Nation Spelling Bee on March 13 in Window Rock.