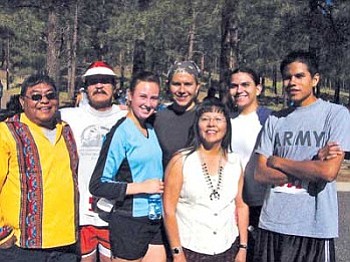 FLAGSTAFF, Ariz.-Runners from across Arizona and far beyond have their own reasons for attending the Native Americans for Community Action (NACA) Sacred Mountain Prayer Run.

For the past 25 years, this 10k, 5k and 2k Fun Run has been a prayer for the Sacred Peaks. But not all are aware of the history and intent of the event.

Vicky Miller, who works at the Flagstaff Bone and Joint Center, saw a flier at work and told her nephew Matt about it. Matt, who traveled from Phoenix and took first place in the 10k event, admitted that he was unaware of the struggle by at least 13 Native American tribes to protect the San Francisco Peaks, an important cultural and spiritual resource. Miller, on the other hand, "has done the research."

Manuel Rodriguez, a seventh grader from Flagstaff, said that he and his brother Marcos and sister Nedia ran because his family had looked at the Flagstaff Summer Running Series program, of which the Prayer Run is a part.

Gerald Lomatewaima, who offered the prayer for the runners and walkers, remembers the history of a long struggle to maintain the pristine condition of the Peaks against corporate development.

"It's like they know it is ours, but they still seem to want to take it away from us," Lomatewaima, a member of the Hopi Tobacco Clan, said. "They know there are sacred things up there. Our elders go there to pray and gather items. It is a sacred place to us."

For many - especially those who have a history with NACA - attending the race is a family affair.

Rose Tohe has worked other places, but she always returns to NACA. She started with the organization as a receptionist, and after receiving a degree from Northern Arizona University she returned as a post-move counselor for those affected by Public Law 93-531 forced relocation. Later, Tohe earned her Master's Degree and took a job with the state of Arizona while working with her husband's business, but returned again to NACA to direct the Workforce Investment Act Program.

"This year is very special to me," Tohe told the crowd gathered for the awards ceremony. "Not only is this the 25th annual run. All three of my boys and my husband ran the race together."

Her husband, Steve Darden, also has a long history with NACA and the Sacred Mountain Prayer Run. He was the director of NACA 25 years ago and was one of the people responsible for beginning the prayer run tradition.

"Urban native people sometimes feel disenfranchised from their reservations and family there," Darden said. "That's why events like this race are so important. People come together and run together - and we grow connections that are so good.

"This event is one of the joys - I look around and see a lot of folks who have made this a tradition," Darden continued.

Of his many accomplishments - successful businessman, consultant, public speaker, spiritual being, and best of all an involved husband and father - Darden takes little credit.

"For myself, I give all the credit to the grandmothers," he said. "I know how to get things done-you go to the women. Our women, in their quiet way, get things accomplished."

As he gestured to the many women involved in various roles across Thorpe Park, Darden said that he didn't mean to take away from the men who were also involved-he simply wanted to recognize women for their own special approach.

"Bob Lomadafkie and I, we've done a lot of things behind the scene," Darden said. "But these days I don't want to be in the forefront. I look around and see all of these beautiful young people, and I believe it's their turn. I have enjoyed being retired, of being able to spend more time in the Hogan."

This made his decision to run for the office of Coconino County Supervisor for District Four something he had to pray about - something he found difficult to resolve.

Even as he was recognized and honored for his many contributions by NACA staff with a beautiful flat Katsina doll (created by Jonah Hill of Kykotsmovi), Darden credited other individuals who supported him in his work as director of NACA, including Robert Lomadafkie, Mike Valdo (Laguna), Dr. Tommy Lewis, Margie Washington, Richard Grimsrud, Patricia Horstman, Franklin Kahn and Lee Brooke Phillips.

Darden's son, Seth, said that he attended the event to represent the ROTC program at Sinagua High School, of which he is a member.

"I also wanted to run because my mom and dad wanted me to," Seth allowed.

Kyle Darden was more vocal about his reasons for running - as well as his work in documenting Sacred Peaks issues - including the Arizona Snowbowl's intention to use reclaimed water to make snow at the ski resort.

Outta Yer Backpack workshops train young Native voices to write, direct and produce documentaries as a means of presenting news and issues from their unique perspectives.

"First, we look at our culture - what it is to be sacred, to be a person who is a part of nature. I look at the underlying principals of the Sacred Peaks issue, without polarizing or stigmatizing - hoping to find a commonality, a leveling quality where we (Native Americans and supporters of skiing on the Sacred Peaks) can work together on this issue.

"We are hoping that people will find it within to see that this is not just a recreational issue, but a habitat issue. We can all enjoy these sacred sites that way."

The Dardens are not the only family involved with the NACA event. Robert Lomadafkie's son Steven was on hand to watch his wife, Duree, run in the 5k event. The couple will be expecting their first child in October. CEO Dana Russell's wife Caroline volunteers every year as well, often braving the important task of directing runners of the different events across the finish line.

Russell had the pleasure of giving prizes to two individuals who have run in every single race - beginning with the first one run in the snow at Ft. Tuthill 25 years ago - Ray Lovato and Nat White.

"Another reason why people keep coming back are the great prizes," Russell said.

This year was no exception.

This year's T-shirt design was designed by Al Bahe.

"I am very thankful to my Creator for giving me the gift of painting, to express my feelings and show my culture in paint for people to see," Bahe said.

His design shows four feathers in a circle, and honors the Paiute, Havasupai, Navajo, Apache and Hopi peoples.

W.B. Franklin, originally from Ganado, donated prints of two of his award-winning paintings.

"Finding myself at a crossroads in 1984, I decided to become the real thing, and become a full-time artist."

Louise Tolie, Navajo, wove the beautiful rugs. She is 87 years old, and considers herself blessed. Tolie has been weaving since she was 15 years old, and except for eight years with a Flagstaff sewing company, she has been a homemaker and weaver.

Jonah Hill, Hopi, is a wood and stone sculptor. He created the beautiful flat Katsina as well as free standing Katsinam.

"I hope to pass on a feeling of joy and happiness through my carving in the hopes that people who collect or connect to my art gain something beneficial in their everyday lives."