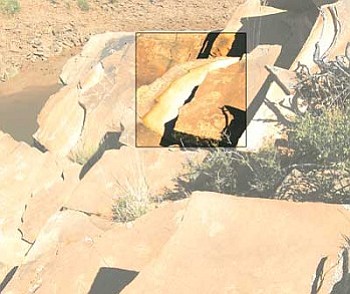 ASH FORK, Ariz. - Officials in the Ash Fork area are currently investigating the theft of a rock petroglyph panel that Forest Service archaeologists said dates back thousands of years.

The missing panel, which measures roughly two feet long by one foot wide, contained a number of abstract, western archaic images, according to archaeologist Neil

"We've got a couple of volunteers that look after this ... [rock art] site along Partridge Creek," Weintraub said. "We've known about this site for many, many years and we've had several projects that have fully documented the rock art. As part of being Arizona site stewards, these folks, basically every few months or whenever their time schedules work, they go and monitor the conditions of our most important sites in the area."

The theft of the rock are was discovered during a regular visit by a steward to monitor the site, Weintraub said.

"It turned out that they had taken photos of the site in March of 2007 and they called me last August and mentioned that they thought there had been a theft of one of the panels. They took some photographs," he said. "At the time we were pretty busy with a lot of our priority work."

Using the original recordings, Weintraub said they were able to determine exactly what panel was stolen. The missing piece, he said, contained a number of ancient petroglyphs.

"We have no idea who might have done this," Weintraub said. "But it is, of course, against the law to vandalize, deface, [or] remove [rock art from] Forest Service lands and archaeological sites."

Officials are currently documenting the theft, he said, in order to determine a possible dollar value for the missing panel on the open market.

"We have to document these things and put in an archaeological value to them, a commercial value as well, as part of what's called the damage assessment for the Archaeological Resource Protection Act of 1979 (see sidebar)," Weintraub said.

"At this point we're just trying to get a little more information and make sure it doesn't happen again. We're actually looking at ways of working with our YCC (Youth Conservation Corps) crew to put up some protection measures around the archaeological site here. We're probably going to fence off this area.

"We're also seeing threats from folks that do what we call 'moss rocking,' so the surface rock in Ash Fork that has lichen on it. In many of the claims areas, people are coming out here, outside of when Forest Service folks are around, and basically stealing surface rock. They take loaders out here that just snap off the rock that has lichen on it, because it's basically fairly prized for patios and other sorts of construction material."

He said fines for damaging protected materials can range from $100,000 to $200,000. The loaders, Weintraub added, continue to get closer and closer to the protected rock art sites.

"For the most part these people are not going after the rock art. It's pretty well known in this area that it's against the law," he said. "But in this case this was clearly a vandalism. The rock art was targeted."

Patrick Whitehurst is a reporter for our WNI sister publication, the Williams-Grand Canyon News (www.williamsnews.com).