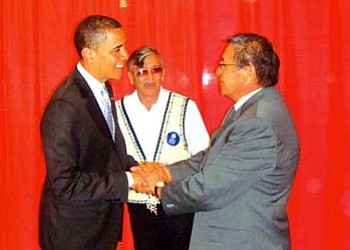 "I was very pleased to meet with Senator Obama," Vice President Shelly said. "I was not there to make an endorsement, but instead to show Senator Obama what Navajo is doing and to instead ask for his support."

Vice President Shelly joined Oglala Sioux President John Yellow Bird Steele during the meeting with Obama, where Vice President Shelly talked about some of today's challenges and how important youth are to the future of the Navajo Nation. During their conversation, he said the Navajo people need jobs and economic prosperity to bring younger technical school and college graduates back to Navajo.

"We have the largest land base and the largest population. We also have the manpower and an intellectual community made up of recent graduates to fuel a self-sufficient Nation," Vice President Shelly said.

Shelly also gave an overview of issues important to the Navajo Nation, such as investing in energy, bettering health care for Navajos and Navajo veterans, and building on economic business initiatives.

"I expressed to Senator Obama we're building our economy but we have challenges with basic infrastructure," Vice President Shelly said. "We know the federal government can assist. During my visit, I gave him a point-of-reference list on our issues. Our emphasis on renewable energy got his attention. He said he views renewable energy as an opportunity to create economic development in rural tribal communities."

Vice President Shelly's meeting followed with a Rapid City town hall meeting for residents of South Dakota where hundreds were gathered to meet the candidate.

"I think now is an opportune time for Native Americans to hear from presidential candidates to get a view of their strategic plans on how they can better Indian Country," Mitchell said.

Sen. Obama responded by saying, "We've got to get more money into the system. Part of what we need to do is make sure Indian Health Services is doing what our health care system needs to do, which is to emphasize prevention. So many of the problems Native Americans face are treatable illnesses. If we are helping with regular check-ups, regular screenings ... then we will actually save money on the long term because people will be healthier.