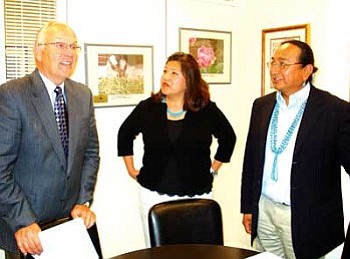 "We're asking Congress to oppose President Bush's low budget requests for law enforcement and jail construction," said Rex Lee Jim, who serves as chairman of the Public Safety Committee. The president is charged with submitting his budget for federal programs to Congress each year.

"We have instances where inmates are being transported from Tuba City to Window Rock for incarceration, then back to Tuba City for arraignment, and then to Gallup for longer incarceration," explained Jim during his meetings with Senate and House offices this week.

Summarized in the Navajo message to Congress is the need to increase spending for detention facility construction to $50 million. In President Bush's budget request to Congress, a total of $8 million is proposed.

"There's funding for public safety buildings in the BIA budget," said Jim in a meeting with Senate and House staff. "But tribes like Navajo, which are on contract with the government, are lower in priority and rarely receive money."

Priority in federal funding is usually given to BIA law enforcement buildings. With the current $14 million available to be shared nationally among tribes, the money is used mainly for maintenance and repairs, not new construction.

This Senate mandate and report, which focuses on Navajo Nation detention and court facilities, was initiated by Sen. Pete Domenici (R-N.M.) last year as he worked to fund the construction of the proposed Navajo Supreme Court facility.

Since appropriations are routinely reserved for new construction, the recommendation in the

Currently the Navajo law enforcement department for the Crownpoint district is working with McKinley County in a cross-jurisdictional agreement where Navajo police and Sheriff deputies exercise enforcement powers.

"We have some of the most severe manpower shortages in law enforcement," said Thoreau Council Delegate Edmund Yazzie. "What we've done in New Mexico for our police, said Yazzie, "is to deputized sheriff deputies to serve as police officers in Navajo while they've commissioned our officers to enforce laws in the county."

The ratio of police officers per thousand is less than one officer in comparison to the national average of 2.5.

"There are 44,000 criminal convictions every year," added Hope MacDonald-LoneTree, council delegate for Coalmine Canyon and Toh Nanees Dizi chapters. "Yet we only have 59 bed spaces. We're grateful for the support of public safety issues by the Senate Indian Affairs committee, but we need $50 million for jail construction."

Also during their visit Jim and Council Delegate Yazzie joined the Navajo Judiciary Committee via video conference from the Navajo Nation Washington Office for a legislative oversight meeting. The Public Safety and Judiciary committees work together in making requests to Congress.

Members of both the Public Safety and Judiciary Committees plan to return to Washington next month to meet with more Senate offices and the Bureau of Indian Affairs.