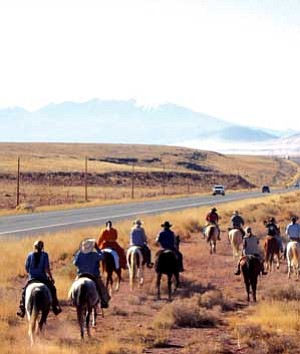 On the weekend before Thanksgiving 2006, horseback riders from across the Navajo Nation came together to bring attention to the ongoing struggle to protect the sacred San Francisco Peaks (Photo by Klee Benally).

FLAGSTAFF, Ariz. - Despite a federal court case now under consideration and a March 2007 ruling that rendered illegal the proposed development and expansion on the leased federal land occupied by Arizona Snowbowl, the ski resort has announced plans to attempt to move forward with their development proposal.

Arizona Snowbowl is seeking an amendment from the Forest Service to their current lease permit in an attempt to start construction on the ski teaching area included in the controversial proposal.

A Ninth Circuit Court ruling on March 12, 2007 provided protection for the San Francisco Peaks, a mountain held sacred by more than 13 Native American tribes and has been hailed as a victory for religious freedom, environmental justice and cultural survival. The San Francisco Peaks are recognized internationally as a sacred site as well.

On Dec. 11, 2007 a Federal Appeals Court in Pasadena, Calif. conducted an en banc hearing in response to a petition from the Forest Service and Snowbowl to review arguments in this precedent-setting legal battle. Issues under consideration are religious freedom, environmental destruction, and public health dangers associated with the use of treated sewage effluent for snowmaking on the Peaks. An opinion has yet to be issued on the matter.

"It's unfortunate that the tribes and Indigenous people across the nation have to wage a constant struggle to protect sites they hold holy or sacred," stated Howard Shanker, attorney for the various tribal groups named in the initial lawsuit. "In this specific instance I need to learn more about the proposal and have to have the opportunity to discuss it and its impacts with my clients before determining how, or whether or not, to take action."

"What they are proposing is not just a conveyor belt but the reshaping of a holy site. It sounds like an extraordinary way to waste resources and ... energy," stated Jeneda Benally, a volunteer with the Save the Peaks Coalition

"Any development or proposal such as this needs to follow the NEPA process and allow for an adequate public comment period. We hear that the Forest Service is accepting comments from tribes on this proposal until June 16. This is not an adequate comment period for the hundreds of thousands of tribal members and concerned citizens represented in the current litigation to respond," explained Rudy Preston of the Flagstaff Activist Network.

"I just learned of this from the news. This is an underhanded attempt to thwart the current legal process and to disregard the law, the environment, and the American Indian Religious Freedom Act," says Francis Tso, a volunteer with the Save the Peaks Coalition.

Flagstaff city studies and the Final Environmental Impact Statement show that the operation of Snowbowl has no impact on the Flagstaff city economy.

Although the plan was rendered illegal, the city of Flagstaff still maintains a contract with the ski area to sell up to 180 million gallons of treated sewage effluent during the winter seasons. In December of 2006, Flagstaff Utilities Director Ron Doba administratively signed off on Snowbowl's contract to renew its option to purchase reclaimed water for five years. This decision was made behind closed doors without public input. Without the contract for the treated sewage effluent, it would not be possible for the owners of Snowbowl to attempt this development.

The Save the Peaks Coalition will be joining in prayer with multiple Native American and environmental organizations across the nation on June 20 during The 2008 National Day of Prayer to Protect Native Sacred Places.