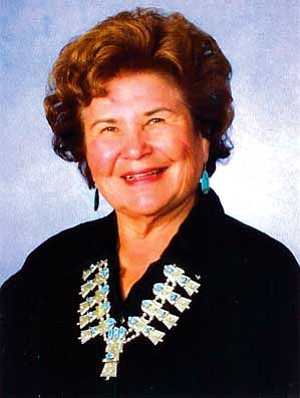 FLAGSTAFF, Ariz. - Coconino County District 5 Supervisor Louise Yellowman announced June 4 that she will not seek re-election at the end of her term in 2008. In a poignant and sometimes tearful speech to her fellow Board members and the public, she recounted the highlights of her term, which began on Jan. 1, 1980.

"I recently made the very hard decision not to run again for the Board of Supervisors. Now is the right time," said Yellowman. "I am so proud and honored to have served you all for the past 27 years, but now my husband and family need me."

During her long and distinguished career on the Board, Yellowman advocated tenaciously for Native Americans and served as their voice on important issues such as the Rare Metals uranium mine clean-up in Tuba City (and the resulting victim compensation appropriations by Congress), more funding for veterans, the elderly and youth, alcohol prevention and domestic violence prevention programs.

The passage of a 1/2 cent sales tax in 1992 paved the way for Yellowman to obtain support for reservation residents through the County General Fund. She had advocated for years that people living on the reservation paid sales taxes and should, therefore, receive the benefits of their tax money through County programs and services.

When asked about her most well received accomplishment, Yellowman named the solid waste transfer station.

"The trash facility is the one thing people are most grateful for because it helps keep trash off our beautiful streets," she said.

Coconino County has a long-standing agreement with the Navajo Nation, Bureau of Indian Affairs, Indian Health Service, and other local agencies to operate and maintain the transfer station.

Coconino County recently completed construction on a park located in Tuba City. The Board of Supervisors unanimously decided to name the park Louise Yellowman County Park in honor of her dedication to the residents in her district.

Yellowman is proud of her many other accomplishments on the Board. She was instrumental in the closure of the White Pumice Mine on Do'kooslid and worked to prevent further development of Dinetah Sacred Mountains. She helped secure a building on Tuba City Main Street for the Public Library, lobbied the state to bring the Department of Motor Vehicles to Tuba City, and established the first voter registration and elections office in Tuba City.

"In working with my fellow Board members, the people I represent in District 5, county staff and all the residents of Coconino County, I have always tried to bring positive things to our communities. It was within me to serve and I have worked to build partnerships and develop agreements that benefit everyone," Yellowman said.

"Being a Diné woman, I have always looked to the guidance and teaching of White Shell and Changing Woman. In my life journey, from an early age to adulthood, I have applied the standards and expectations set by White Shell woman and taught to me by my grandmother. I have applied the Diné philosophies that emphasize living a holistic life, of being in harmony and balance on the Corn Pollen Path," she said.

The Navajo Nation Office of the Speaker added, "Louise Yellowman was instrumental in creating positive changes for District 5. The Navajo Nation is thankful for her dedication over the years to improve the quality of life for everyone in her county."