Hopi High graduates told to 'go out and make a difference' 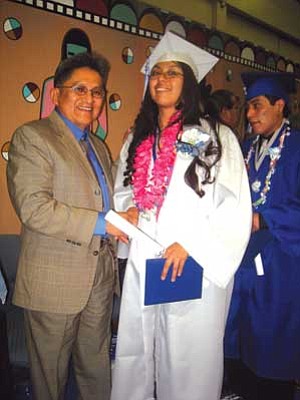 POLACCA, Ariz. - Graduation is not a reason for losing touch with your classmates.

That is the message that the graduating class heard from Hopi High Valedictorian Briann "Boo Boo" Laban during Hopi High graduation ceremonies held May 23 at Hopi High School.

Laban told her classmates that they are just a telephone call or a My Space away from getting in touch with each other.

"Don't shut each other out. We're going out into a harsher world and we need each other. Try new things, never give up," she said.

Laban, who will be going to Dartmouth, said her classmates come from a small community but don't need to remain small.

"Make new friends and blaze a new trail," she said.

Laban, who received the Gates Millennium Scholarship, praised her classmates for working hard and never giving up. She thanked her family, friends and teachers for playing a role in helping her gain the top status in her class. "I thank my family for always nagging me," she said.

"Friends, you are the ones who kept me positive. The life of a high school student can be fun, but annoying at times."

Salutatorian Jake Yazzie, who is also headed for Dartmouth, recounted how he came to Hopi High School without knowing anybody; he was also short, chubby and felt like a dork.

Yazzie said when he first entered Hopi High he felt like he should have been "a Warrior like most of my friends" at Tuba City High. But now, he said, he is glad that he is an "obnoxious Bruin."

Yazzie said his goal was to finish at the top of his class, so he was upset when he finished second in the class because he got a B in physical education.

"The secret of success is to have a purpose," he said.

He told his classmates that they should let their dreams put a smile on their face and they should take themselves beyond their limitations.

Kelly Keith, president of National Honor Society, told the graduates to seize every opportunity and to have faith in themselves.

Miss Indian Northern Arizona University Marissa Navakuku served as the keynote speaker. Hopi High Principal Glenn Gilman praised the seniors for a multitude of accomplishments. The foremost was passing the Arizona Instrument to Measure Standards (AIMS) test in reading, writing and math. He said this resulted in the school reaching Adequate Yearly Progress as the students demonstrated academic and athletic spirit.

He told the seniors that they have endless potential and creativity. He urged them to be responsible and law abiding citizens.

"Go out and make a difference in the world. We are all proud of you," he said.

Principal Gilman praised the young women who left school for maternity leave only to return in order to earn their diplomas.

Darold Joseph presented the Kathy Steele Award to Adrienne Josytewa and Xylina. Joseph asked the audience to be quiet for five seconds--and they were.

He told them this showed what can be accomplished when people ask. "Always ask because you never know what will happen," he said.