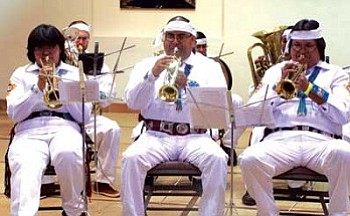 Several members of the Zuni Pueblo Band play for an audience at the 18th Annual Zuni Festival of Arts and Culture held at the Museum of Northern Arizona Memorial Day weekend (Photo by Wells Mahkee Jr./NHO).

FLAGSTAFF, Ariz. ? On Saturday and Sunday, May 24 and 25, the 18th Annual Zuni Festival of Arts and Culture, part of the Museum of Northern Arizona's ongoing Heritage Program, was held at the Museum of Northern Arizona (MNA) following a four-year long hiatus. The MNA and the A:shiwi A:wan Museum and Heritage Center (AAMHC) in Zuni worked together to bring back the annual festival, which was last held in 2003.

Following the event, MNA Director Robert Breunig said he was elated at the turnout of more than several hundred visitors over the course of the two-day festival, despite a late winter storm that made its way through northern Arizona on Friday and remained throughout much of the day on Saturday. Albeit, the storm did little to dampen the spirits of all who were in attendance, and according to Bruenig, many of the Zuni artists did well in overall sales of their arts and crafts.

AAMHC Director Jim Enote reiterated that this event was so much more than "just another Zuni show," noting, "It is a very public gesture, acknowledging Zuni presence and influence on the Colorado Plateau."

As such, the AAMHC was instrumental in providing guest lectures on the Zuni language, Zuni emergence and migration, and the Zuni Map Project, an innovative approach to locating, mapping and preserving Zuni traditional place names.

There was even a segment specifically for children in which they had the opportunity to partake in arts and crafts activities and watch a puppet show based on the Zuni dragonfly story put on by MNA docents.

The Zuni people have lived at present-day Zuni Pueblo (sometimes referred to as Halona: Idiwan'a, or the "Middle Place") located in northwestern New Mexico for thousands of years. Zuni is the largest of the 19 pueblo tribes in New Mexico. They are often considered the most traditional of all of the Southwestern pueblo tribes, having managed to preserve their core beliefs and identity while concurrently maintaining contemporary lifestyles in today's modern world. This leads many Zunis to say that they live figuratively at Idiwan'a, meaning that they live in the "middle" of two completely separate worlds.

The Olla Maidens danced delicately while balancing pottery vessels on their heads. This dance seemed to be a popular one among spectators as they gazed in awe at the amazing feats of balance. A few spectators wondered aloud, "How do they keep the pots from falling off?"

The Zuni Pueblo Band, one of the few remaining Native American community bands in the nation, also performed for the festival. They proudly displayed the Zuni traditional style of dress, including red woven sash belts and handmade Zuni jewelry. They played selected marches by John Phillip Sousa, K. L. King, Roland Seitz, and other well-known composers for parades and concerts. The band eventually paid tribute to the men and women of the armed forces with a medley of armed service marches for which they received great applause.

Despite the weather, the overall mood was jovial, and visitors to the Zuni Festival seemed pleased that they received possibly more than what they expected.

The MNA will continue their Heritage Program with the 75th Annual Hopi Festival of Arts and Culture to be held in early July. For more information, visit the MNA Web site at www.musnaz.org.

This year's Zuni Festival was made possible through a grant from the Arizona Humanities Council. Additional sponsors include the Arizona Commission on the Arts, the National Endowment for the Arts, Arizona ArtShare, Flagstaff Cultural Partners and the city of Flagstaff.